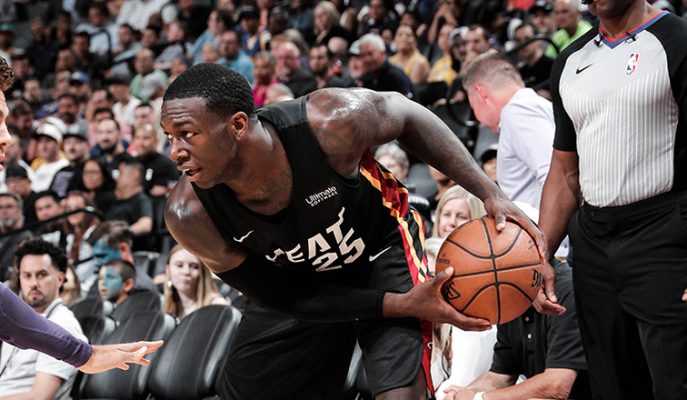 When the Miami Heat signed free agent guard Kendrick Nunn, the news went largely unnoticed. Yet Nunn’s former coach from Simeon High School in Chicago believes that the 24-year-old has the potential to be ranked with other memorable alumni from that school, such as Derrick Rose and Jabari Parker.

Shandel Richardson of The Athletic looked at how Nunn’s promising basketball career took off at Simeon, where he teamed with Parker to help the perennial powerhouse school win four consecutive Illinois state titles.

When he left, he and Parker joined a select group of Simeon alumni, which included Rose and the late Ben Wilson, by having their numbers retired by the school.

Asked to compare Nunn to the other three players who were honored in similar fashion, his coach at Simeon, Robert Smith, said:

“(Nunn) didn’t get as much respect as those guys in high school, but he’s right up there with them.”

The University of Illinois recruited Nunn, where he played three seasons and developed into a productive guard who averaged 15.5 points, 5.0 rebounds and 1.7 assists per game. However, a messy off-the-court issue involving domestic battery ended his time with the Illini and he transferred to Oakland University.

After sitting out a year as a transfer, he bounced back strong by averaging 25.9 points, 4.7 rebounds and 3.8 assists. He also led the country in 3-pointers by knocking down 134 shots beyond the arc at a rate of 39.4 percent.

Despite that production, he went undrafted and was signed as a free agent by the Golden State Warriors. However, he was released and ended up playing for the Santa Cruz Warriors of the G League before the Heat signed him on the final day of the regular season last April.

Nunn played for the Heat in Summer League action and garnered NBA Summer League First Team honors after leading the team in scoring.

He now joins a Heat team that’s lost Josh Richardson and drafted Tyler Herro, but could use depth at point guard given Goran Dragic’s age and possible departure at some point during the season via trade.

Smith says that Nunn’s work ethic is reminiscent of Los Angeles Clippers guard Patrick Beverley, who was another Chicago high school star and who the Heat released during their 2010 training camp:

Nunn rejects the idea that he’s likely to only be an option off the Heat bench and feels he’s in the right place:

“Not at all. I could’ve taken some two-ways (from other teams), but I belong in the NBA. I know what I bring to the game. I want to contribute to this team. My game translates perfectly. Everyone knows that I like to compete. I want to show that every night.”

One poignant aspect of Nunn’s connection to Simeon will be in his Heat uniform number of 25. That was Wilson’s number at the Simeon before he was tragically shot to death in 1984.