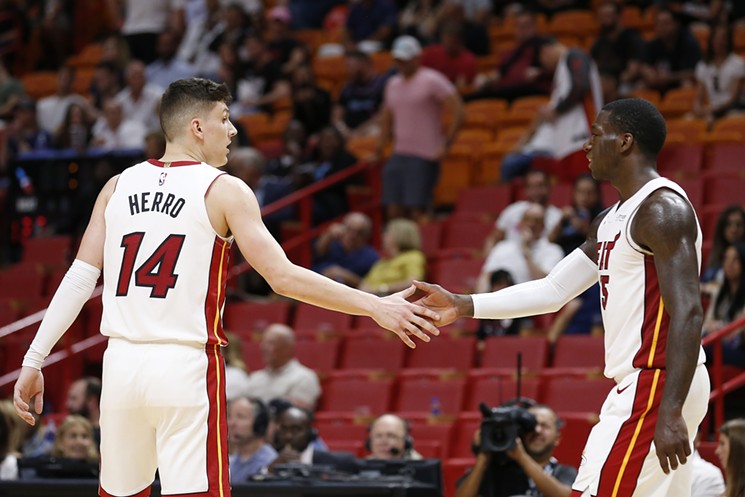 The Miami Heat have two beloved rookies in Kendrick Nunn and Tyler Herro.

The two rookies have already built a very strong friendship with each other, a friendship that is clearly paying dividends both on and off the court.

“I think that’s just a testament to the hard work we put in,” Herro said. “I’m sure a lot of teams across the league let their rookies do whatever in the summer and go stay at their home or something like that. But we’ve been together all summer long. Right after summer league, we took a couple days off and we were right back in Miami working out.”

Whatever the reason, Nunn is clearly quite fond of the University of Kentucky product.

“Man, it’s like I’ve known him all my life,” Nunn said of Herro. “I’m with him every day, even on off days. Away from the gym, we’re always together.”

Herro echoed Nunn’s sentiment, going so far as to call Nunn his brother.

“It started in the summer league,” said Herro. “We’re very similar, so we got a good bond together. That’s like my brother. Definitely feels like I’ve known him forever. I can tell him anything, he can tell me anything. We’re just real comfortable around each other.”

Fans were ecstatic when the Heat selected Herro with the No. 13 pick in the 2019 NBA Draft. Experts predicted that his shooting ability would help him make an immediate impact and could result in him becoming a major steal.

What fans did not know is that the Heat also got what sure seems to be an all-time steal in Nunn. The 24-year-old undrafted rookie is currently averaging 22.3 points per game on 51.9 shooting from the field and 42.1 percent from beyond the arc.

Herro has not gotten off to quite as hot of a shooting start and is averaging 12.0 points per game on just 38.5 percent from the field and a woeful 26.7 percent from deep. Considering what fans saw out of him in the preseason, however, there is more than enough confidence that he will rebound from this shaky start.

Whatever happens production-wise for Herro and Nunn remains to be seen. What already seems quite clear is that a very special friendship is currently forming in South Florida.