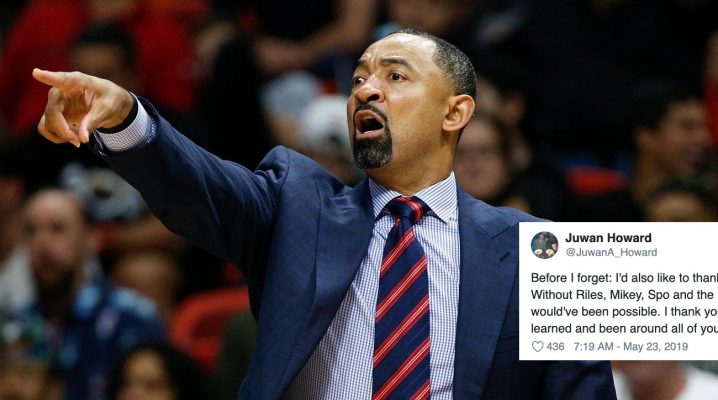 Former Miami Heat player and assistant coach Juwan Howard has signed on to continue his blossoming coaching career at his alma mater, the University of Michigan.

Before heading up to Ann Arbor to take over the head coaching job, Howard took the time to send a heartfelt message to everyone in the Heat organization via Twitter.

Before I forget: I'd also like to thank the @MiamiHEAT organization! Without Riles, Mikey, Spo and the rest of the staff none of this would've been possible. I thank you all! I am truly blessed to have learned and been around all of you!

Howard’s fame in the basketball world took off while he was a part of the iconic Fab Five team at Michigan. Following his collegiate career, he went on to become the fifth overall pick in the 1994 NBA Draft.

He enjoyed a 19-year career in the NBA, which included stints with the Heat, Dallas Mavericks, Houston Rockets, and more.

In fact, Howard was a part of both the 2012 and 2013 NBA championship in Miami. During the latter year’s NBA Finals run, Howard did not play, but instead served as a quasi-assistant coach.

That position turned full-time the following offseason when he became an assistant coach under Heat head coach Erik Spoelstra.

Now, Howard is starting the next stage of his coaching career at a program that has come to expect regular season success and deep March Madness runs.

There’s no doubt that his time working under both Spoelstra and team president Pat Riley has prepared him for the job.
[xyz-ihs snippet=”HN-300×250-TextnImage”]