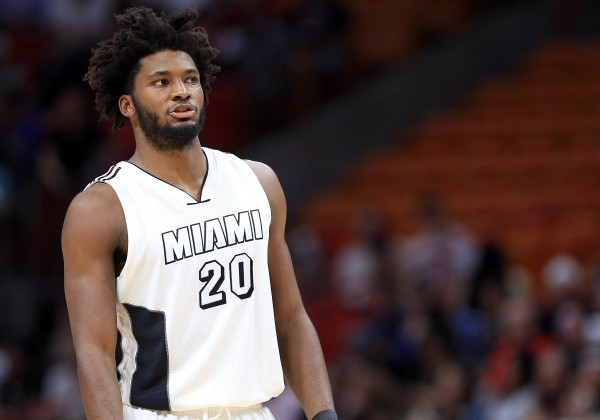 While the upcoming season will be an important one for many of the Miami Heat‘s young stars, it may be most crucial for second-year pro and former top-10 draft pick Justise Winslow.

Last year, Winslow’s season was cut to just 18 games after he tore the labrum in his right shoulder, an injury that required season-ending surgery. Now, with training camp less than month away, Winslow is happy to say that he is at 100 percent health.

“My shoulder is feeling great. I’m 100 percent now,” Winslow said. “Doing different contact stuff, playing with guys in 3-on-3 [games]. Playing against the other coaches and the trainers and things like that. I feel good. I’m in pretty good shape. I’m feeling lighter and eating better, so I’m excited for this upcoming season.”

Winslow hopes to maintain his health as the 21-year-old aims to become the Heat’s starting small forward this season. Winslow has already shown the ability to be a strong defender in the league, but will look to improve his offensive game as well. His strongest showing last season came just days before his season-ending injury when he posted a career-high 23 points with 13 rebounds and four steals.

When asked if that kind of performance is what fans can expect from a fully healthy Winslow, he displayed the confidence he has in his game.

“Yes and no,” Winslow began. “I think I’m 10 times better than I was in that game. And also I was struggling with different [injury] issues in that game, as well. I’m just excited. I know what my ceiling is and what I’m capable of. So I’m just trying to bounce back and come back with full strength.”

If Winslow is able to live up to his words, the Heat could turn from a team that was on the outside looking in during the 2017 NBA playoffs to a team vying for control of their division this upcoming season.
[xyz-ihs snippet=”Responsive-ImagenText”]