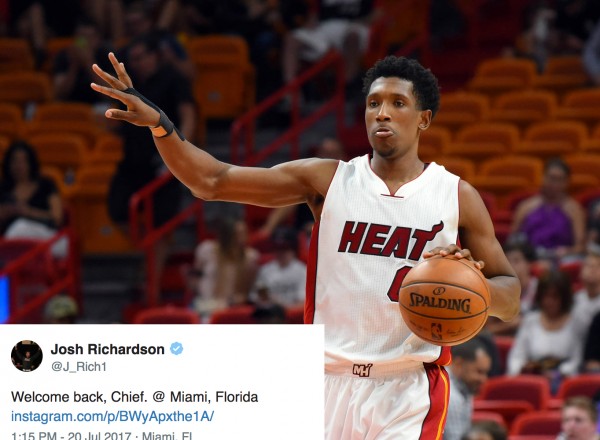 At least one player is excited about Udonis Haslem coming back to the Miami Heat, and that’s vocal young guard Josh Richardson, who sent out a simple, but reverential tweet on Thursday:

Richardson’s affectionate usage of the nickname “Chief” for Haslem is fitting, as the highly respected 14-year veteran and Miami native will continue to be a constant source of leadership, within the locker room and the city of Miami.

While the 37-year-old University of Florida graduate isn’t the player he was a decade ago, as a legit bruiser up front, he’s cemented his legacy as a cornerstone player. He’s spent his entire career in South Beach, contributing to three title wins.

This season may mark the end of a strong career, which will likely lead to a front office position within the organization. There were brief rumors about Haslem considering signing with the Cleveland Cavaliers, reuniting with LeBron James, however there was no doubt that Mr. 305 was going to finish his career in Miami.
[xyz-ihs snippet=”HN-Native-EndofArticle”]