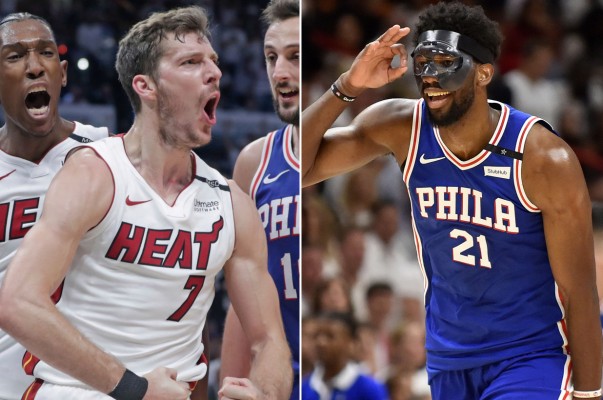 Goran Dragic added fuel to the fiery rivalry between the Miami Heat and Philadelphia 76ers in the waning seconds of Monday night’s Game 2 victory. He did so by driving to the basket for an easy layup despite the fact that the victory was already secured.

According to 76ers big man Joel Embiid, Dragic didn’t receive the criticism he deserved for pouring it on late, and that fact made his team’s blowout victory in Game 3 that much sweeter.

Embiid said Dragic didn't get enough "sh–" for his late layup in Game 2 and he's glad the Sixers kept scoring in Game 3. "I think it’s good. I love blowing teams out. I like the fact that we did that. We’re not here to make friends. We’re here to win a series.”

Embiid made quite a statement in his playoff debut on Thursday night, finishing the game with 23 points, seven rebounds, four assists, and three blocks in 30 minutes. His team made a statement as well, pulling away in the final frame to win by a 20-point margin.

As for Dragic, it’s hard to criticize a competitor for wanting to cement a meaningful victory. Embiid is known for waging wars of words against members of the Heat, so his comments on the issue should not come as any surprise.

Following the Game 3 defeat, Dragic and the Heat will look to score a counterblow and make a statement of their own in Game 4 on Sunday night. If they can manage to even the series at 2-2, the rivalry between both teams on the court will surely equal the rivalry off of it.
[xyz-ihs snippet=”HN-300×250-TextnImage”]