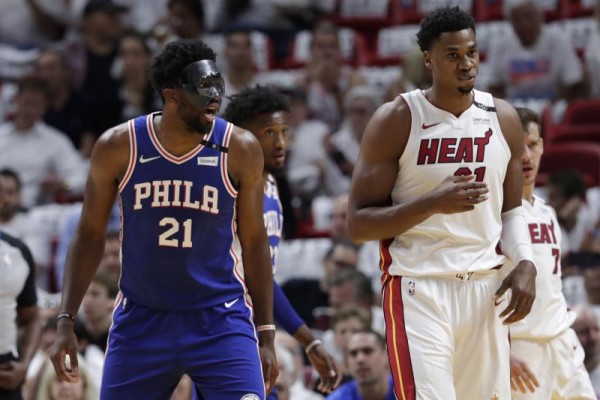 Even though the Philadelphia 76ers eliminated the Miami Heat in the first round of the 2018 NBA Playoffs in five games, 76ers center Joel Embiid has added another chapter to his rivalry with Heat center Hassan Whiteside.

Embiid missed the first two games of the first-round series between the 76ers and the Heat because of a fractured orbital bone. When he returned, he made an immediate impact and went on to average 18.7 points, 10.3 rebounds, 2.0 assists and 3.0 blocks per game. The 76ers won all three games that Embiid played in the series.

Whiteside, on the other hand, struggled to make any type of impact and wound up averaging 5.2 points, 6.0 rebounds and 1.2 blocks in 15.4 minutes per game. With the 28-year-old on the court during the series, the Heat were outscored by 26 points.

The rivalry between the two centers, which started during the preseason after they called each other out on Twitter, seems to have no end in sight.

By defeating the Heat, the third-seeded 76ers moved on to face the second-seeded Boston Celtics in a matchup that begins Monday night.
[xyz-ihs snippet=”HN-300×250-TextnImage”]