Report: Jimmy Butler and Tyler Herro Arrived at Miami Heat Facilities Before Sunrise to Get in Workout 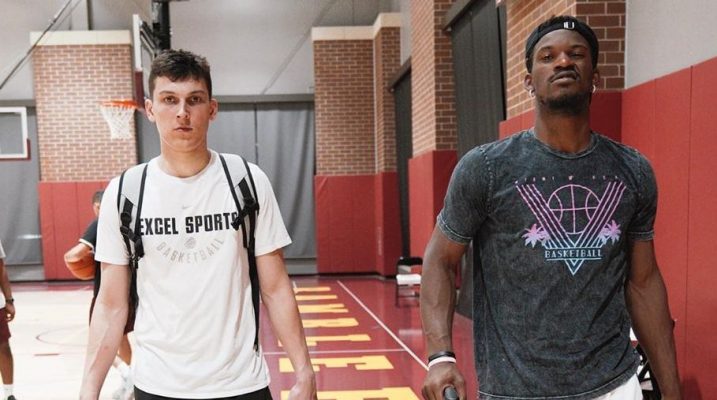 Just a few weeks remain in the offseason for the Miami Heat, and it’s already clear that two new additions to the team are dedicated to making a big impact during the upcoming season.

Even before the sun had risen on Friday, both veteran Jimmy Butler and rookie Tyler Herro arrived at the Heat’s practice facility to get in a workout.

That sound you may have heard in downtown Miami this morning was Jimmy Butler and Tyler Herro arriving before sunrise to get work in on the Heat practice floor.

Butler posted a post-workout video to his Instagram to prove that he and Herro are certainly taking their offseason training seriously.

Herro was the 13th overall pick out of the University of Kentucky in June’s NBA draft. The Heat’s hope that he can deliver some instant offense to their lineup. Butler was acquired from the Philadelphia 76ers in a deal that cost the Heat the services of Josh Richardson.

Earlier this week, Butler and Herro were in Chicago also getting in a workout in order to sharpen their game. That level of dedication is something that’s obviously part of the makeup of both players. Butler’s intensity and Herro’s focus on improving his game figures to blend in well with a Heat culture that prizes a strong work ethic.

While the Heat’s regular season doesn’t get underway until Oct. 23, it’s clear that both Butler and Herro are eager to help get the team back to the playoffs.

The hope is that their teammates are also ready to focus on competing in that same battle.