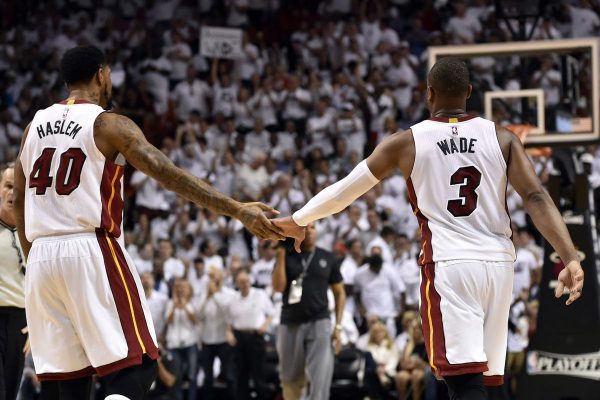 The Miami Heat faced off against the Washington Wizards on Friday night, and after the game, Wizards forward Jeff Green took to Instagram to show his respect for Miami legends Dwyane Wade and Udonis Haslem.

By the looks of it, Green brought his own jerseys in preparation for Friday night’s game. In return, Haslem and Wade both wrote personal messages to Green.

The Instagram post is a clear sign of just how much Wade and Haslem are not only beloved amongst fans, but also how important they are to their fellow players. While Green is an NBA star in his own right, he was purely a fan in this instance.

Green played alongside Wade for a portion of last season as member of the Cleveland Cavaliers. He also lives in Miami in the offseason, and it’s quite clear that he not only respects Wade for what he’s done on the court, but for what he’s done off of it in the city of Miami.

“The city took him in as a young kid. He grew up as an adult in this city, did beautiful things in this community, on this court for this city. They embraced him for who he is and he embraced the city back. That’s big, man,” said Green. “And he’s a great human being. He’s a guy who’s well respected here.”

Wade has already made it clear that he will retire following the end of the 2018-19 season. As for Haslem, he is still reportedly unsure whether or not he will call it quits by season’s end.

Despite the fact that both of their careers may soon come to an end, it is quite clear that the impact they have had on the NBA will remain for many seasons to come.
[xyz-ihs snippet=”HN-300×250-TextnImage”]