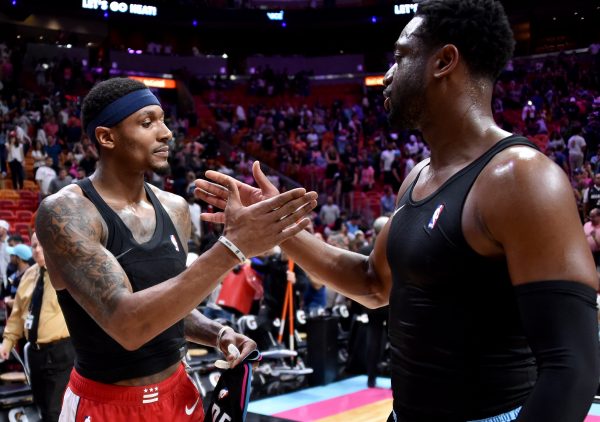 The Miami Heat defeated the Washington Wizards on Friday night, and following the game, Wizards All-Star Bradley Beal told Dwyane Wade just how much of an impact the Heat legend has had on him.

Bradley Beal on Dwyane Wade: "He's part of the reason that I wear No. 3. For the first time, I told him that tonight. I've never told him that in all the years that I've played against him."

Following the game, Wade and Beal swapped jerseys. For Beal, it was a moment he’ll never forget.

“I tried not to lose my mind when he first gave it to me because that’s unbelievable,” Beal said. “I’m trying not to be a fan, but I am a fan, and I am a huge fan of his game. I try to predicate a little bit of my game off of his. This is probably the first time I’m actually saying that, but he’s a legend forever.”

He continued to remark on how huge of an impact Wade has had on the younger shooting guards around the NBA.

It’s an incredible window into what Wade means to the younger generation of shooting guards in the NBA today. As Wade continues to embark on his farewell tour, it stands to reason that he has received similar words on how influential he has been from younger players all around the league.

For Wade, his farewell tour has shown him just how much he means to this league and the players in it.

“Those moments mean everything,” Wade said. “Fan ovations are great, but to be able to have future players coming into this league and good players in this league, and to know you had an impact on their growth, that’s what you want. It meant a lot. When he said it, I thanked him, and I hope I was good enough role model for him.”

Things are sure to just get more emotional as the 2018-19 season comes closer and closer to an end. While both fans and players seem to want Wade’s career to continue forever, even the best things have to end eventually.
[xyz-ihs snippet=”HN-300×250-TextnImage”]