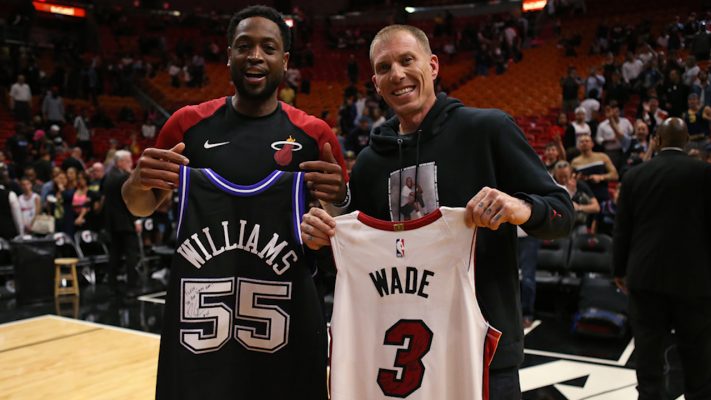 After swapping jerseys with Dwyane Wade after the Miami Heat’s loss on Wednesday night against the Los Angeles Clippers, former Heat point guard Jason Williams took to Instagram to dedicate a post to Wade, calling the three-time NBA champion the “best teammate ever.”

NOTHIN BUT LOVE OUT HERE IN WADE COUNTY! ??? Had to come out tonight to see my brother @dwyanewade and swap jerseys one time with the legend!! #onelastdance ?? The best teammate ever and a real one in every way! ? Flash, you know I got u 4 life bro!!! ⚡️ #miamiheat #heatnation #legend #dwyanewade #flash

Williams played three seasons for the Heat (2005-08), averaging 10.6 points, 4.6 assists and 1.0 steal per game. The University of Florida product was acquired by the Heat in August of 2005 in a five team, 13-player trade that also brought Antoine Walker and James Posey to Miami. That trade is still the largest one ever done in NBA history.

The former seventh overall pick in the 1998 NBA Draft, Williams was the Heat’s starting point guard during the 2005-06 season, when the team won their first ever NBA championship. Williams averaged 12.3 points, 2.4 rebounds and 4.9 assists per game that season.

It’s nice to see that Williams and Wade, two of the most important players in franchise history, still have a solid friendship and the two were able to share the court together one more time before Wade retires after the conclusion of this season.
[xyz-ihs snippet=”HN-300×250-TextnImage”]