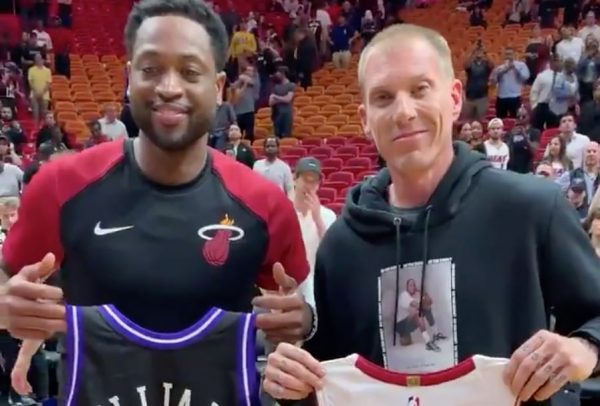 Dwyane Wade has been swapping jerseys with players throughout the NBA this season as a part of his farewell tour, and the latest jersey he has added to his collection is that of former star point guard Jason Williams.

Williams is probably most well known for the time he spent with the Sacramento Kings and Memphis Grizzlies, but he also owns a piece of every Heat fan’s heart for being a part of the team that won the 2006 NBA championship along with Wade.

Williams played for Miami for three seasons, averaging 10.6 points and 4.9 assists per game. While he is certainly enjoying his retirement, it seems he had to get on the court at least one more time to get a Wade jersey before the Miami legend calls it a career.

Now that retired players are getting in on the jersey swap, it will be interesting to see what other former NBA stars make their way to American Airlines Arena to get a No. 3 jersey of their very own.
[xyz-ihs snippet=”HN-300×250-TextnImage”]

dwyane wadeFeaturedjason williamsmiami heatNews Ticker
← Previous Story Dion Waiters Pays Homage to Dwyane Wade: ‘I Get to Learn From One of the Best’
Next Story → Dwyane Wade Speaks on the Love He Still Has for City of Cleveland