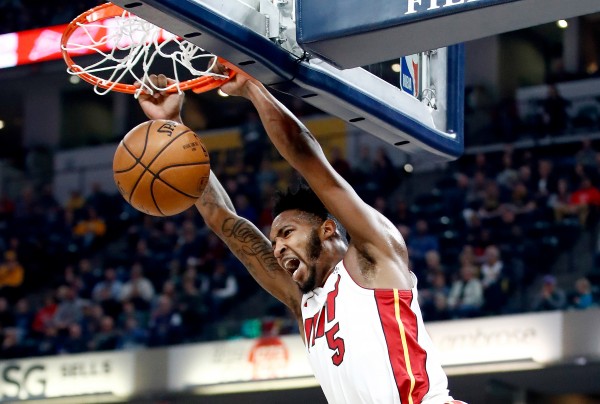 Miami Heat swingman Derrick Jones Jr. had an impressive showing during the Heat’s three games in Sacramento, averaging 21.3 points, 7.7 rebounds and 2.0 steals per game. Jones also appeared in one game during Las Vegas Summer League, but was forced to leave early after suffering an ankle injury while attempting to block an opponent’s shot.

The Heat’s vice president of player personnel, Chet Kammerer, told Barry Jackson of the Miami Herald that Jones’ development was the most encouraging out of any player on the Heat’s summer league roster.

“The most encouraging development over the past two months has been the improved play of Derrick Jones,” said Kammerer. “That’s basically because, in my opinion, he has bought into the Heat culture, philosophy, work ethic, commitment, focus, all those things have blended. [Credit] our staff. They have done an outstanding job.

“That was borne out when he played in Sacramento and one quarter here [in Las Vegas before his ankle injury]. That’s without question the most encouraging development of the summer. Other than that, guys have had their moments over the course of the summer.”

At the start of free agency, the Heat signed Jones to a two-year standard NBA contract, which serves as an upgrade from the two-way contract he was on last season. His new deal is fully guaranteed for the 2018-19 season and will pay him about $1.5 million.

Even with the solid play during the summer, the University of Nevada Las Vegas product might not see a lot of playing time next season as the Heat already have a total of six other players signed to the shooting guard and small forward positions. The possible return of Dwyane Wade would also more than likely lower the amount of minutes Jones receives.