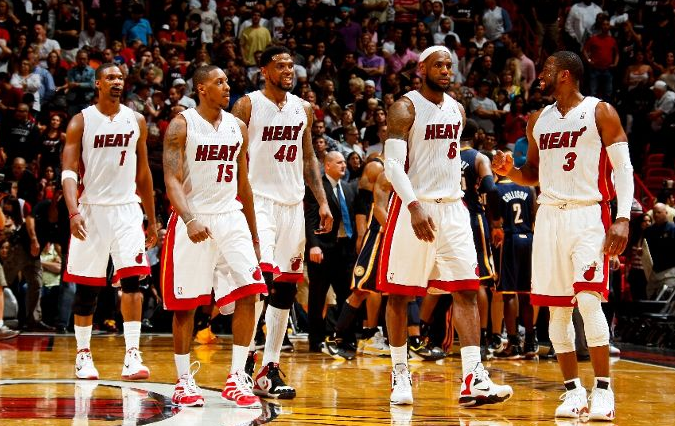 Player option (PO) — Allows a player to accept or decline the final year of his deal.

Team option (TO) — Allows a team to accept or decline an option year.

Unrestricted free agent (UFA) — Allowed to sign with the team of his choosing.

Chris Andersen (PO) – It has been reported that Chris ‘Birdman’ Andersen will indeed decline his player option to become a free agent this off-season. It’s not at all surprising considering how much bang we got for his buck.

We should all be eternally grateful for how big a part Andersen was to our 2013 championship run and we here at Heat Nation wish him the best of luck.

Rashard Lewis (UFA) – Lewis is an unrestricted free agent next year and with the Heat roster only getting older, I don’t see the Heat re-signing Lewis, no matter what the cost. Being an attractive destination, Miami can probably sign someone younger and just as good a three-point shooter for the same price.

Udonis Haslem (PO) – Much like Chris Andersen, Udonis Haslem has a player option for next year. And with a 4.6 million dollar price tag, Haslem has publicly stated that he WILL opt into his contract for next season as everyone would’ve expected.

However, things could get complicated if the Miami Heat decide to sign a Big 4 in Dwyane Wade, LeBron James, Chris Bosh, and Carmelo Anthony. In this case, the Heat would most likely ask Haslem to opt-out of his contract and take less money in order to clear enough cap space for all four all-stars.

Toney Douglas (UFA) – After acquiring Toney Douglas from the Golden State Warriors for Joel Anthony, Douglas is truly expendable. In the grand scheme of things, it doesn’t matter if we see Douglas in a Heat uniform or not next season.

However, my gut tells me that Douglas is gone by next year.

Michael Beasley (UFA) – Michael Beasley showed spurts of brilliance during the regular season, when he received playing time. However, Erik Spoelstra, for whatever reason, deemed him unworthy during the 2014 NBA playoffs. I honestly believe Beasley was a weapon we could’ve utilized more in this year’s playoffs and hope to see him again in a Heat uniform next season. But that’s entirely up to Pat Riley and Micky Arison.

When asked if he would like to return next season, Beasley stated, “Of course, why wouldn’t I want to come back?”

LeBron James (ETO) – We all know the future of the franchise lies heavily in the hands of LeBron James. If LeBron decides to opt-in next season, he would make $20,590,000 in the year 2015. In addition, LeBron could potentially opt-out, take even less money next year to re-sign, and help Miami implement an impactful roster addition. If Pat Riley and Micky Arison can build a solid roster around LeBron James including a much-needed point guard, big man, and overall youth and athleticism, James would be swayed heavily in favor of the Heat, especially after all the backlash he received last year when he decided to leave the Cleveland Cavaliers.

With the Cavs landing the first pick in this year’s draft and the potential of having a young, athletic trio of LeBron James, Kyrie Irving, and Joel Embiid/Andrew Wiggins, I wouldn’t be surprised if LeBron took a max deal and signed with the Cleveland Cavaliers. However, that’s contigent on the Miami Heat not signing ANYONE valuable this offseason (Carmelo Anthony anyone?).

Dwyane Wade (ETO) – With Wade’s ailing knees and a forgettable NBA Finals performance, D. Wade’s stock has plummeted as he is no where near the $20,164,000 he is owed next year, that is, if he decides to opt-in for the Heat. Being on the tail end of his career and the face of the Miami franchise, Wade is most likely going to stay put regardless of what LeBron James does.

However, if Wade wants to do what’s in the best interest for the team, he will take a paycut and accept a lesser role so the Heat can sign more valuable players.

Chris Bosh (ETO) – Like Wade and James, Chris Bosh also has an early termination option this off-season. With Bosh hinting for some time that he doesn’t intend to go anywhere this off-season, much like Wade, I see Bosh opting in for his $20,590,000 as well.

Bosh was interviewed by Dan Le Batard of ESPN Radio earlier this month and said, “I don’t want to go anywhere. I like it here. It’s Miami… Everybody wants to come here.”

Ray Allen (UFA) – As Ray Allen also becomes an unrestricted free agent, his future is just as unclear as LeBron’s. After game 5, Allen said that he hopes to decide on whether to retire or not within the next few days.

“I’ve had a great career, I’m content with what I’ve done,” Allen said. “It’s hard to think past this moment. In the next couple of days I’ll think about it and see where my true heart lies.”

Shane Battier (UFA) – Even though he will become an unrestricted free agent, Battier announced earlier this month that he would be retiring at the end of the season to become both a commentator and an analyst for ESPN.

After playing 13 NBA seasons and winning back-to-back titles with the Heat, Battier made his retirement official on Sunday night after game 5, “I’ve given everything I can to the game and I don’t have any more to give,” Battier said. “And I’m OK with it.”

Known as the guy who has notoriously butted heads with the team’s leaders in James, Wade, and Bosh, and LeBron revealing that the team needs more “high basketball IQ guys,” Riley and Arison would be wise in looking at other point guard options.

Greg Oden (UFA) – We took a chance on signing Greg Oden this season (quite possibly our ‘biggest’ free agent acquisition) and it turned out to be a bust in the long run. Sure, we used him as an effective Roy Hibbert decoy in the Eastern Conference Finals. But as LeBron stated, it’s championship or bust.

Pat Riley and the Heat’s front office will need to put forth a much more concerted effort in the acquisition of a legitimate big man. I mean, atleast one that we play, right? Greg Oden has stated though, that he wishes to play in the NBA next season, regardless of which team decides to sign him.

Justin Hamilton (nonguaranteed) – As nothing is guaranteed in Hamilton’s contract, odds are we don’t see him in a Heat uniform next season.

Note: Norris Cole is guaranteed a contract next season and will not become a free agent.