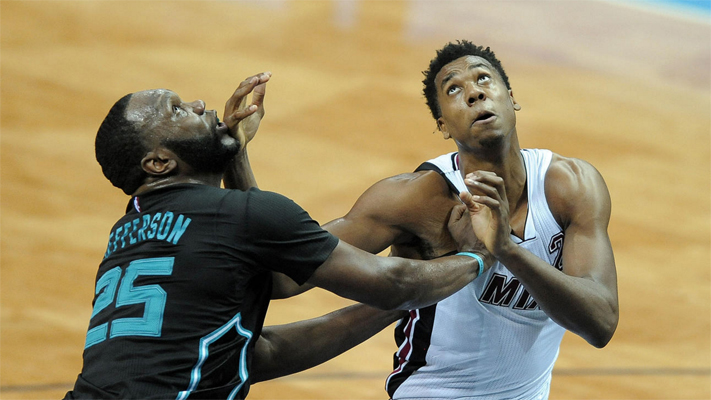 You can call it home-court advantage, you can call it a more aggressive Charlotte Hornets team, but starting Miami Heat center Hassan Whiteside has indicated that the Hornets are doing a lot of acting these past couple games to draw some of their fouls.

Hassan Whiteside says the playoffs should be called “the flop-offs.”

Not only that, but it seems like the Heat are not getting the benefit of a lot of calls, especially when it comes to small forward Luol Deng. The Heat were called for 26 fouls in Game 4 as opposed to Charlotte’s 20, and one play was certainly indicative of which way the whistle was blowing for a majority of the game.

That’s not a foul. Nope nothing going on here. #smh (Via: @nbastreams3)

Jeremy Lin is pictured here clearly getting away with a hack on Deng. As a matter of fact, Lin went to the free-throw line nine times and the Hornets 30 times as a team, versus the Heat getting to the charity stripe just 21 times in Game 4.
[xyz-ihs snippet=”Responsive-Ad”]