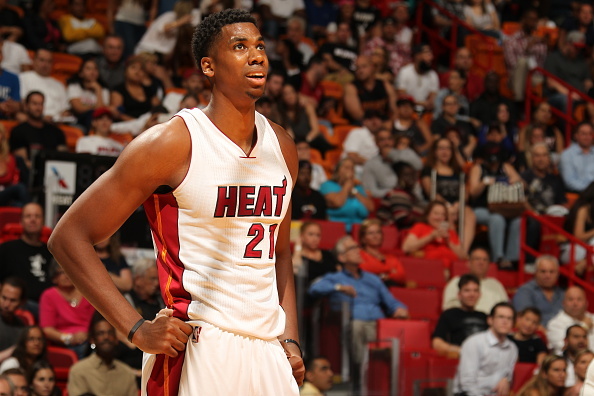 Having center Hassan Whiteside in the starting lineup for the Miami Heat remains an important component of the team’s potential success, but Whiteside has expressed frustration that the team currently has no plays set up for him within their playbook.

Whiteside made the comments at the team’s practice on Tuesday, which was reported by The Sun Sentinel’s Ira Winderman:

Whifeside says Heat do not have any plays in the playbook for him.

In an attempt to address what he believes is a problem, Whiteside has made it a point to immediately put up a shot when he inadvertently receives the ball. This usually comes about with a turnaround jumper or a hook shot, which has generally been met with success in the latter case.

However, the need for making Whiteside a more important focus in the offense is starting to become a more pressing issue. That’s because teams are beginning to take away the only “plays” that are being called for the center at the moment: lobs.

Hassan Whiteside: "They're definitely taking away the lob, because I'm getting tackled every time."

The defensive portion of Whiteside’s game is currently his strongest asset, but in order for the Heat to fully exploit his talents, it appears that making him a more integral aspect of the offense should become a priority.
[xyz-ihs snippet=”Responsive-Ad”]