Hassan Whiteside Reacts to Being Snubbed in Annual GM Survey 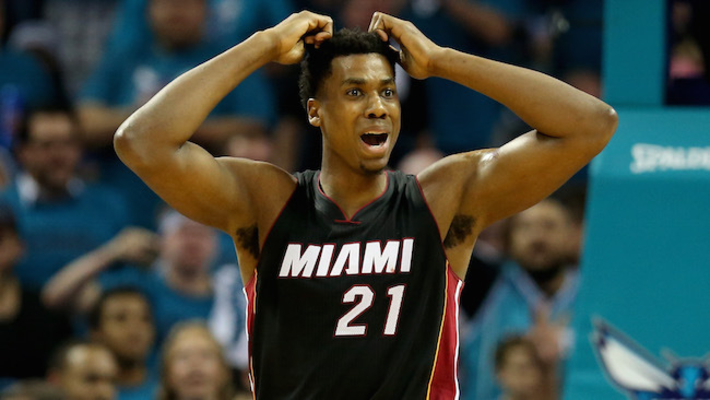 On Wednesday, the 2017-18 NBA GM Survey was released and when Miami Heat center Hassan Whiteside was excluded from the list of best NBA centers, he had some choice words for those who doubted him.

“I don’t care what them GM thinks,” Whiteside said following practice at AmericanAirlines Arena. “Four years ago, they didn’t think I could play in this league. I care about what Pat Riley and Coach Spo (Erik Spoelstra) think.”

Whiteside continued to say that he’ll prove his worth by defeating the teams with centers who were named to the list. Leading the list were Karl-Anthony Towns, Anthony Davis, Marc Gasol, and DeMarcus Cousins.

He added that he doesn’t need awards or recognition to stay motivated.

“I kind of draw from myself,” he said. “If I listened to everybody around me, I would never have come back from Lebanon, China, being cut four-plus times. I just kind of always draw from myself and that self-wish and I know the player I can be.”

Spoelstra weighed in on the snub as well, blaming Whiteside’s absence from the list on the Heat’s poor record last season. He believes recognition will come with greater team success.

“The only thing you can point to is that nobody saw us play,” he said. “We had such a bad record — we weren’t on TV, no one was watching, nobody cared. People started noticing in the second half, I’ll tell you that.”

GMs may not consider Whiteside among the league’s best yet, but if he continues to dominate as a defender and a rebounding force, and if the Heat continue to progress as a team, league-wide recognition for the talented big man is surely to follow.
[xyz-ihs snippet=”Responsive-ImagenText”]