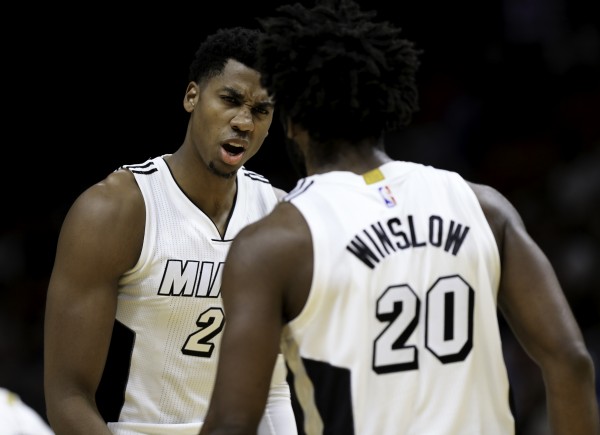 Miami Heat big man Hassan Whiteside has been considered a top defensive center in the league for quite some time. In 2016 he was the NBA blocks leader, and last season he was the rebounding leader, but it wasn’t his personal accolades that won the respect of his teammates and coaches.

As the Miami Herald‘s Barry Jackson explained, Whiteside gained the respect of those around him by becoming a selfless, team-first player during the Heat’s 30-11 second half stretch last season.

“Everything. He was all in,” Dragic said. “He had those stitches [in the webbing of his hand] but he said, ‘I’m not going to let my team down.’ He was playing through some tough injuries.”

“Sacrificing for the betterment of the team,” the shooting guard said. “Some of his numbers went down, but the effect he was having went way up. Some of his block numbers went down [but] he could have easily had the block title. It wouldn’t have been easy for the team to do what we did if we didn’t have him in a [defensive] stance as low as he can be, bothering [opponents], while being a dominant rim protector, while understanding the importance of screening, rolling hard, sealing, all the little things he could do to really dominate a game”

Even head coach Erik Spoelstra admitted how impressed he was by Whiteside’s growth.

“I think he made his biggest strides from the New Year on last year of all the time that he’s had in a Heat uniform,” he said. “He really learned how to impact winning. It had nothing to do with his stats, even though he’s going to do that no matter what. But it really became about learning how to make winning plays, learning how to make his teammates better and caring more about the guys in the locker room than he cared about himself. That’s the best thing I’ve seen. We can build on that.”

Whiteside knows team accomplishments are more important than individual ones. That doesn’t mean, however, according to Jackson, that Whiteside doesn’t want to be considered among the best in the league.

“Whiteside acknowledges the maturity, asserting that making the playoffs supersedes individual accomplishments,” Jackson wrote. “But he’s still clearly annoyed about not being named first, second or third team All NBA after leading the league in rebounding (14.1), along with averaging 17.0 points and 2.1 blocks. Those honors went to Anthony Davis (first team), Rudy Gobert (second) and DeAndre Jordan (third).”

Still, Whiteside has shown great maturity by focusing on how he can help the team first.

“Nothing I can do about it,” he said. “What more do you want from your center than rebound and block shots and lead the league in those categories? As a center, I don’t really know what more you want.

Whiteside has become an emotional leader for the Heat, and while that has clearly earned the respect of his teammates, Spoelstra admits that his statistical contributions are still highly valuable.

“Of course, we still want him to dominate in all of those areas,” Spoelstra said. “Why not? Why not lead the league in rebounds and blocks, have the best defensive team and go get that Defensive Player of the Year award and really earn it?”

The Heat’s 30-11 second half last season was an incredibly positive sign of team growth. With young players competing at nearly every position this season, Whiteside’s leadership and selfless approach to the game will prove paramount as the team aims for a return to the NBA playoffs and beyond.
[xyz-ihs snippet=”Responsive-ImagenText”]