Don't Miss
Home / Media / Hassan Whiteside: ‘I’m a Great Passer, I Just Have to Show You All’

Hassan Whiteside: ‘I’m a Great Passer, I Just Have to Show You All’ 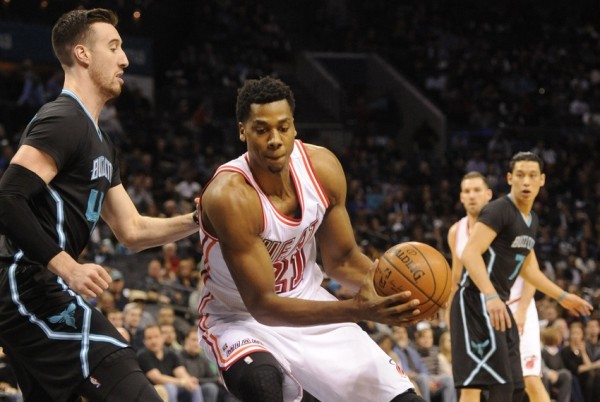 To many Miami Heat fans, when the name of rising star center Hassan Whiteside comes up, they likely don’t think of assists on the basketball court. According to Manny Navarro of the Miami Herald, of the 69 centers that played at least 50 games in the NBA last year, Whiteside was tied for 61st in assists with only 29 dimes in 73 contests.

With the 2016-17 season on the brink of starting, former Heat guard Dwyane Wade — now with the Chicago Bulls — and power forward Chris Bosh likely to never play for Miami again, it’s Whiteside’s time to shine on the court as the face of the Heat franchise.

In order to shed all the double-teams that he will likely draw this upcoming season, Whiteside is determined to become a better passer and find teammates who are open around the perimeter.

“He’s been working at it,”Heat head coach Erik Spoelstra said Thursday after practice. “Now we’re trying to get him in spots where he can see the defense out in front of him and be aware of when help defense may come. I think that’s his next evolution. It’s not just who you are dealing with, but the next defender. And we’ve been working at that. He knows it’s something he has to work on.”

The center has his work cut out for him in establishing strong relationships with his new teammates on this year’s roster, which includes fresh faces like Dion Waiters, Wayne Ellington, Derrick Williams, Luke Babbitt and James Johnson.

“If guys are open I’m going to give it to them,” Whiteside said. “I think it’s really more so playmaking and about my usage rate, how many times I touch the ball in that situation. So, I should have a lot more assists.”

Whiteside has a lot of confidence in his passing skills, but says he just hasn’t had enough opportunities to prove it on the court.

“I’m a great passer. I just have to show you all. Most of the time, I was just the guy dunking the ball. I was giving people assists instead of giving out assists,” Whiteside said.

The thought of Whiteside being that much more versatile on offense is scary, considering he’s already an absolute monster on defense and only getting better.
[xyz-ihs snippet=”Responsive-ImagenText”]