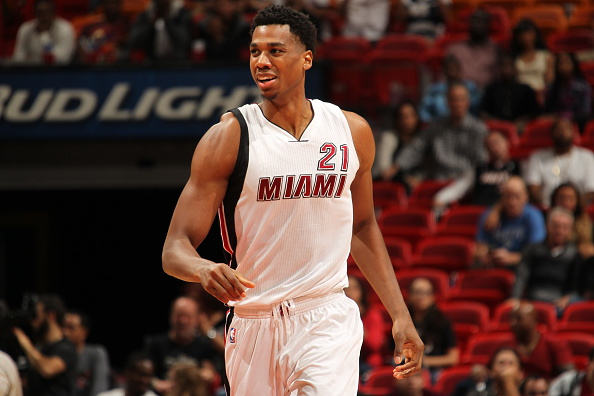 Miami Heat rising center Hassan Whiteside did not have a game to write home about in the team’s 91-87 loss to New Orleans on Friday night, scoring just 10 points on 40 percent shooting and 33 percent shooting from the free-throw line. However, the 7-footer remains hopeful that his next visit to New Orleans will be as an All-Star.

Statistically speaking, Whiteside has a strong case to make the All-Star Game. He is the league’s best rebounder (14.9) and fourth-best shot-blocker (2.35). His scoring has also increased from last year (now 18.0 points per game), while his field-goal percentage has lowered to just 55.1 percent.

However, Whiteside’s biggest challenge in being selecting into the 2017 All-Star Game will be the new voting system in place. This year player and media votes will be taken into account in determining the starting lineup. Whiteside believes that this will work against him because many coaches and players will not view him as a top-three froncourt player in the Eastern Conference.

“All I know is they changed the voting this year,” said Whiteside. “But it’s hard, because frontcourt, they don’t really have a center, they just have frontcourt.”

He will have to battle with the likes of LeBron James, Carmelo Anthony, Jimmy Butler, Kevin Love, Paul George and others for the final frontcourt spot. Whiteside can still be selected by the coaches for a bench spot if he doesn’t garner enough fan votes, but he isn’t confident they will recognize his play.

“I don’t know. I really don’t know,” he said when asked if he thinks the other 14 coaches will vote for him. “I have no idea, because every time I think I have, I haven’t. So I don’t know.”

Another challenge for the emerging star center will be convincing fans, players, and coaches that the Heat’s 10-21 record does not reflect how effective his play has been. The Heat have lost a lot of close games this season despite numerous monstrous efforts from Whiteside.

Earning one of the 12 All-Star spots on the Eastern Conference roster would be gratifying, but Whiteside knows that earning wins for the Heat will be more important in the long run.

“I think it’s always something that’s in somebody’s head,” Whiteside said. “I think it would be a cool experience, just to be recognized as one of the better players in the league. But, I mean, if it doesn’t happen, it’s not the end of the world.”