Hassan Whiteside and Heat’s Guards at Odds Over Screen-Setting 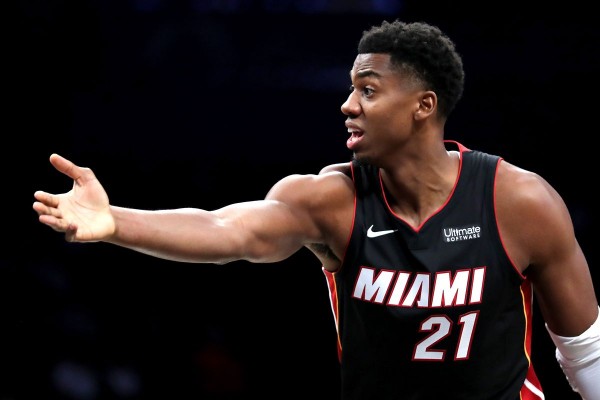 The Miami Heat (7-9) haven’t started the 2017-18 NBA regular season in the best way possible. After finishing last season on a 30-11 run and keeping the core of the team intact during the offseason, expectations for Miami to begin this season were high.

However, 16 games into the season, the Heat are 12th in the Eastern Conference and playing sloppy, uninspiring basketball. Now, it appears that chemistry issues have surfaced as three of Miami’s best players have exchanged different opinions about the team’s problems with screen-setting.

Just one day after the Heat got thrashed by the Indiana Pacers at home, Dion Waiters and Erik Spoelstra pointed to the Heat’s screen-setting as a key issue.

“We’ve got to go out there and play our part,” Waiters said. “It’s sometimes tough. We’ve got to go out there setting screens and things like that. How teams are playing us now, if we’re able to hit our guy then it makes everything easier for the guard. If we’re on a string like that, if the big sets the screen, we’ll be able to get downhill and get in the paint. It puts the defense in a position to stop the ball or Whitey (Hassan Whiteside) to get a dunk or KO (Kelly Olynyk) to get a three. It’s all about being on that same accord.”

Regarding Waiters’ comment, the Heat don’t appear to be on the same page as Whiteside had a completely different take on the hot topic:

“I mean, it’s just, it’s just, man, the guys aren’t being patient,” Whiteside said when asked about the issue following Tuesday’s practice. “Me and D-Wade (Dwyane Wade) showed that all year long. We ain’t had no problems. It’s just being patient, man, just be patient, wait for the screen and let guys set you up and make decisions.”

“It’s really important,” the 31-year-old Dragic said. “If me and Dion want to get in the paint then of course we need good screens so we can get there and break down the guys and try to spray it or finish. When there’s no screen then it’s really tough because then you have two guards, two players with nowhere to go. So that’s why it’s really hard to get open shots and create open shots.”

Dragic, who has played with Whiteside since 2015, had no problem being blunt about the big man. The veteran even complimented Olynyk on his great screen-setting ability but also offered Whiteside some encouragement in the process:

“I think Kelly is really good at [setting screens],” Dragic said. “We need to get Hassan to do that. But, he got to that a little bit, he’s already shown he could do it. The Detroit game and Washington game, he was great. But we need to be consistent.

The team averages 8.6 screen assists per game, which is 12th most in the league. Although they’re in the better half of things, that rank should be higher considering Dragic and Waiters are best utilized when they’re attacking the rim. If they’re not getting that opportunity consistently then it will be tough for them to penetrate, find open teammates and get buckets.

The Heat will get to work on this issue Wednesday night against the red-hot Boston Celtics, winners of 16 straight games. Tipoff for this entertaining match is set for just after 7:30 p.m. ET.
[xyz-ihs snippet=”HN-300×250-TextnImage”]