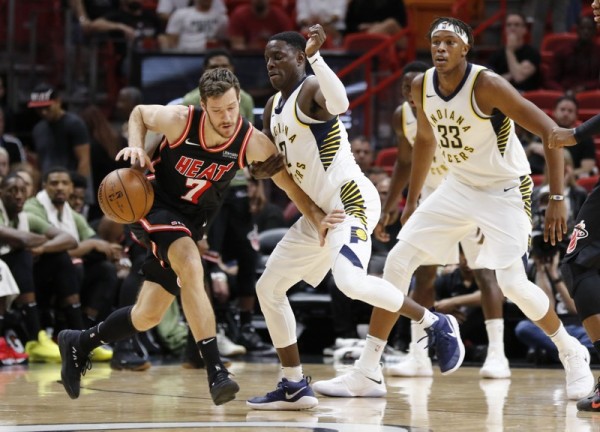 (Miami, FL) – The Miami Heat looked to have turned a corner on their season when they beat the Washington Wizards on Friday night, but when the Indiana Pacers came to American Airlines Arena on Sunday, the Heat proved once again that they have a lot of improving to do.

The contest seemed to be on its way to a thrilling shootout all game long as both teams traded shots in the first half. In the third quarter, however, the Pacers clamped down on defense and found a rhythm offensively on their way to a blowout victory over the Heat, 120-95.

“Look, I don’t have an answer to our unreliability right now,” head coach Erik Spoelstra said following the disappointing loss. “We had our most inspiring effort, not perfect game, but inspiring effort in Washington and then this is other side of us. I don’t have an answer for it right now, one way or another we’re going to get down to the bottom of it. That’s pretty much my comment right now.”

The Heat had led with ten seconds left in the first half, but the momentum changed instantaneously when Myles Turner hit a 3-pointer and Thaddeus Young intercepted the Heat’s subsequent inbound pass and made a last-second jumper of his own to put the Pacers up three at the half, 58-55.

In the third quarter, the Pacers started to take control of the game. While Young, Turner, and Victor Oladipo began firing on all cylinders, the Heat’s starters failed to get anything going. Dion Waiters failed to score a single point all game and shot 0-for-10 from the field. Goran Dragic struggled offensively for the second game in a row, scoring only eight points and adding five rebounds and four assists in the game.

The Heat’s offensive struggles continued throughout the third quarter as the Pacers managed to push the lead to 18 points halfway through the period. Miami finally managed to put an end to a 12-0 Pacers run thanks to a Bam Adebayo layup, but that only stalled Indiana’s onslaught. The Heat continued to be outplayed on both sides of the court and were outscored, 32-13, on their way to a 22-point deficit by the end of the third quarter.

It was more of the same in the final frame as the Pacers pushed their advantage to 30 points with 6:30 left in the game. While the Heat continued to try and find a way to battle back, it was clear that the Pacers had secured their victory as fans began filing out of the arena early with their heads hung low.

There wasn’t much for Heat fans to be happy about on Sunday, but one promising aspect of the game was shooting guard Wayne Ellington‘s performance off the bench. In just 25 minutes of play, the nine-year player scored 21 points on 7-of-12 shooting from behind the arc. It was Ellington’s season-high and the first time he had scored at least 20 points in a game since the Heat’s Oct. 23 matchup against the Atlanta Hawks. Josh Richardson also played well in a 15-point, two-assist, and two-block performance. His game was cut short in the waning minutes of the fourth quarter, however, when he suffered an eye injury and exited the game early.

While Hassan Whiteside added 15 points, seven rebounds, and two blocks of his own, he failed to make the same impact that Heat fans have grown accustomed to seeing this season.

“It sucks. I can’t really say much else about it. It sucks. They came in here and hit us in the chin,” Whiteside said before being asked to explain the Heat’s inconsistency. “I don’t know, man. I wish I had the answer. If I had the answer I would definitely tell the guys and we would be an amazing team.”

Sunday’s loss ended up being the largest defeat for the Heat so far this season. It was also their fifth loss at home in just eight games. The next stretch for the Heat will prove to be one of the most difficult so far as they face off against the Boston Celtics at home before traveling to play the Minnesota Timberwolves, Chicago Bulls, Cleveland Cavaliers, and New York Knicks on a four-game road trip.

While the Heat will look to make a statement by snapping the Celtics’ current 15-game win streak, what the they really need to do is manage to string together a winning streak of their own. They’ll get the opportunity to start such a streak in their next game on Nov. 22.
[xyz-ihs snippet=”HN-300×250-TextnImage”]