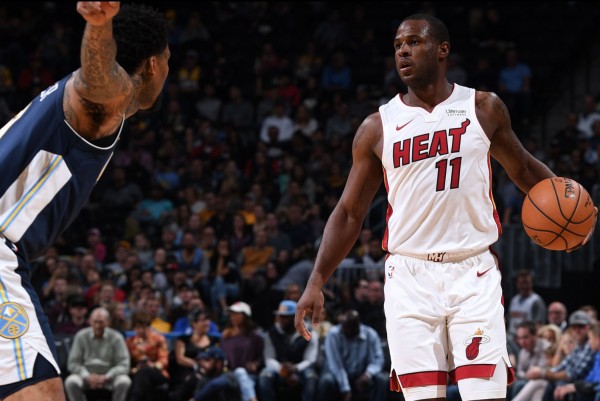 (Denver, CO) – The Miami Heat gave their fans another nail-biter on Friday night when they lost, 95-94, to the Denver Nuggets in a heartbreaker.

The Heat and Nuggets went back and forth in the game until the final moments when they fell short on a last-second shot as shooting guard Dion Waiters, who had 15 points, three rebounds, and three assists in the game, missed a 23-foot jumper.

“I was going to attack,” Waiters said of the last-second shot. “When I want to go attack, right before I’m trying to get to my spot I lost [my dribble] so I had to kick it out to J-Rich (Josh Richardson), and try to get it back. By the time I did all that it was like five [seconds left], so I just had to get a shot off. I mean it went in and out, and you got to live with that. It sucks, but we put ourselves in a position to win and coming down that stretch we just got to do a better job of knowing what’s going on, what guys like to do, and put ourselves in a better situation. It’s going to be hard to win on the road. We fought back, came up short, don’t hold your head, but this one we let slip away.”

Following the game, Dragic reflected on the last-second loss.

“Yeah, tough, tough loss,” Dragic said after the game. “We feel like we got it, that we going to win that game, but it is what it is, we need to go on to the next one.”

The Nuggets came out strong in the second quarter, battling back from a 37-28 deficit and outscoring the Heat early. The Heat continued hitting shots, however, to stay ahead, and went into the half with a score of 58-51.

Throughout the game, the Nuggets relied heavily on big man Nikola Jokic, who had 19 points and 14 rebounds, and Paul Millsap, who had 27 points, nine rebounds, and five assists on the game.

In the fourth quarter, the Heat continued to struggle offensively as the Nuggets went on a 10-0 run with seven minutes left in the quarter.

The last minute of the game was a kinetic display as both teams battled to take the victory by a razor’s edge. With 30 seconds left in the game, Waiters drove through three defenders on the way to the basket to give the Heat the lead 93-92. Moments later, Millsap drew a foul while shooting a 3-pointer with 11.8 seconds left, giving the Nuggets a one-point lead.

“You feel the emotions right now, everybody is disappointed, when you have an opportunity to get a win on the road like that,” Heat head coach Erik Spoelstra said. “Millsap is a heck of a player, it’s a lot easier said than done saying, ‘Hey you gotta contain him. Keep him off the free-throw line.’ He’s very clever, savvy player under pressure and that was hell of shot fake there at the end.”

Following the game, Heat forward James Johnson, who had 15 points, 10 rebounds, and four assists on the game, broke down the decisive foul on Millsap.

“I knew it was going to be a foul,” he said. “It’s still running through my head, I really feel bad for our guys, we worked really hard and we was playing really hard out there. You know, learn from it and try not to let that happen again.”

The first game of the Heat’s six-game road trip is in the books. Now the 3-5 Heat will look onward to their next game against the Los Angeles Clippers on Nov. 5.
[xyz-ihs snippet=”HN-300×250-TextnImage”]