Hassan Whiteside Clarifies What He Meant by DeAndre Jordan Comments 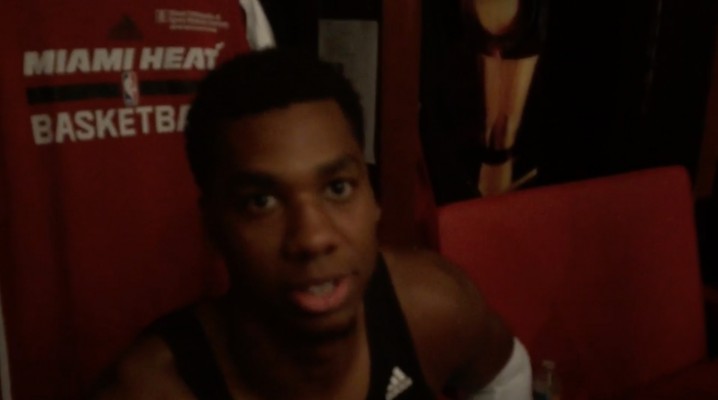 Friday night’s matchup between the Miami Heat and the Los Angeles Clippers was preceded by a somewhat incendiary comment made by Heat big man Hassan Whiteside. When asked about opposing Clippers center DeAndre Jordan, Whiteside was quick to dismiss any comparison between himself and the L.A. big man:

“He catches lobs,” Whiteside said before the game. “I shoot jumpers, catch lobs and block shots. I do a lot. He just catches lobs.”

It didn’t take long for the seven-footer’s questionable comments to make its way through the media outlets as sort of a fiery big-man-to-big-man diss. However, after Jordan essentially iced the game with a late putback hook shot off a missed free throw by Chris Paul, Whiteside was quick to clear the air to the media regarding his pre-game comments:

“Definitely misconstrued,” Whiteside said in the locker room. “First, I would never diss another big fella. I’m all for the big guys in the game. I was just saying on the offensive end, our roles are different. Obviously, he’s a top-three rebounder and one of the best defensive players in the game. I didn’t think I had to explain that, but I see I do. Quote me on that.”

While the postgame clarification may seem like a bit of backpedaling on the part of Whiteside, his praise of Jordan did seem genuine for the most part. He even went on to add that his own offensive role, back when Dwyane Wade and Chris Bosh were running the show in Miami, used to be limited to mainly catching lobs as well. Now that those two no longer don Heat uniforms, though, Whiteside’s role on offense has clearly evolved.

In an attempt to clear the air even further, Whiteside eventually went on to discuss the relationship he’s established with Jordan as proof that there’s no hard feelings:

“I’m also good friends with him (Jordan). He’s a good guy, man,” he said. “I wasn’t trying to say, ‘Oh, he just can do this or just can do that.’ I was just saying our offensive roles, that’s all I was saying.”

If there remains any more air to clear, perhaps the two high-flying big men can settle their “differences” on the court in just a few weeks when the Heat visit the Clippers in Los Angeles for a Jan. 8 matchup.
[xyz-ihs snippet=”Responsive-ImagenText”]