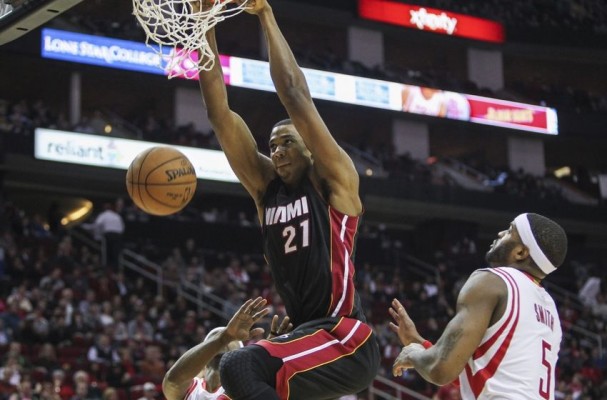 Hassan Whiteside will enter the 2015-16 season with high expectations.

Following a 2014-15 season that saw Whiteside establish himself as one of the top young players in the game, there will be expectations for the Miami Heat center to not only improve upon his numbers, but do it over the course of a full season. Last year, Whiteside was signed as a free agent in late November, and did not see regular minutes in the rotation until January.

As Whiteside enters the last season of his contract, ESPN’s Michael Wallace stated during “The Big O Show” on 560 WQAM that Whiteside believes he can be a dominant center in this league:

“The thing is, Hassan Whiteside feels like he’s a big guy, and he feels like you’re going to have to adjust to him more than he’s going to have to adjust to you. Some of that is ego. Some of that is supreme confidence. Sometimes it’s knowing what you’re capable of doing. But the bottom line is that this is a guy that believes that he can be a dominant center in this league. And you’re not going to be able to put a 6’6″, 6’7″, 6’9″ guy on him and expect to stop him.”

The last sentence by Wallace was in direct reference to Whiteside and Draymond Green’s Twitter argument over the last couple of days. The Heat center dissed small ball while the Golden State Warriors’ Green insulted “big ball.”

As nice as his per-game averages were, the 26-year-old center played in just 48 games last year, and has yet to see regular minutes on a game-to-game basis over an entire 82-game season.

As he enters his first training camp with the Heat, it should be interesting to see if Whiteside can maintain his high level of play over the course of an entire season.

If he is able to do so, there is no doubt that he will have every opportunity to demonstrate that he is capable of being a dominant center.
[xyz-ihs snippet=”Responsive-Ad”]

draymond greenFeaturedgolden state warriorshassan whitesidemiami heatNews Ticker
← Previous Story Amar’e Stoudemire: ‘I Feel Like I Can Still Get Back to All-Star Form’
Next Story → ESPN Predicts Goran Dragic to Be All-Star This Season