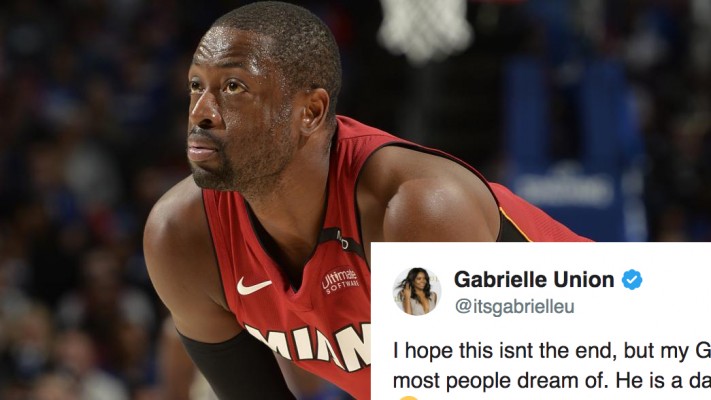 Dwyane Wade and the Miami Heat left the court in defeat in Game 5 on Tuesday night. After the game, Wade’s wife and number one fan Gabrielle Union reminded everyone that Wade will always be a winner no matter what.

Union is known to take to Twitter to shower her baller husband with compliments, but Tuesday night’s post really took the cake. Earlier this year, Wade admitted that this season may be his last in the NBA and Union took a moment to honor his incredible career.

I hope this isnt the end, but my God… @DwyaneWade has a career most people dream of. He is a damn legend. An icon. And hes cute ? #HeatNation

Wade performed well throughout the five-game series with the Philadelphia 76ers, averaging 16.6 points, 4.2 rebounds, and 3.6 assists per game, but his contributions were not enough to help the Heat overcome their talented adversaries.

Now that Wade’s offseason has begun, all Union and the rest of his fans have to do is wait to see whether or not this truly is the end.

As Union expressed in the tweet, we all hope this isn’t the end of his career. If it is, we can be sure that a No. 3 jersey will be hanging from the rafters at American Airlines Arena as soon as possible.
[xyz-ihs snippet=”HN-300×250-TextnImage”]