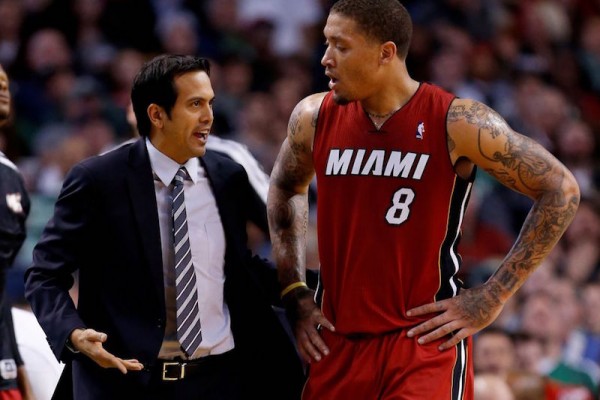 When Michael Beasley was drafted second overall by the Miami Heat in the 2008 NBA Draft, he was thought to be the next star in South Florida. He went on to play only two seasons in Miami before being traded to the Minnesota Timberwolves, and it seems the small forward has never forgiven Heat head coach Erik Spoelstra for giving up on him so quickly.

Beasley spoke with Marc Berman of the New York Post earlier this week to discuss what he thinks went wrong in Miami.

“I feel I could’ve gotten more out of that organization,’’ Beasley told The Post on Wednesday. “I feel Spo’ (Spoelstra) could’ve believed in me a lot more than he did. It’s in the past. [There’s] no love lost.”

Beasley not only played in Miami from 2008 to 2010, but was brought back three seasons later to play for the Heat in both the 2013-14 and 2014-15 seasons. He failed to make much of an impact, however, and went on to play for the Chinese Shanghai Sharks only to sign two 10-day contracts with the Heat in 2015. He later went back to China to play for the Shandong Golden Stars before ultimately continuing his NBA career with the Houston Rockets.

Beasley has enjoyed some of his best basketball in recent memory this season with the New York Knicks. He is averaging 11.7 points and 4.8 rebounds per game on the season, but averaged 15.4 points per game in December. He has continued that kind of production in 2018 and has become something of a fan favorite for the passionate Knicks fan base.

Still, Beasley feels his reputation as a defensive liability continues to follow him wherever his career takes him. A reputation he believes Spoelstra had a role in creating.

“There’s a lot of guys who didn’t play defense,’’ Beasley said. “When the game is over and it’s 4-2 at the final buzzer, then you can hold one person accountable for the defense. When teams scoring 100 points a game…”

While the 6-foot-9 forward certainly feels some contempt for Spoelstra, he does not hold the same opinion of Heat president Pat Riley.

“He’s a Hall of Famer — one of my favorite people in the world,’’ Beasley said. “He helped me in life.”

Riley seems to share a mutual affinity for the former Heat player, reportedly saying that Beasley’s return to form this season proves that he was not a wasted pick back in 2008.

“This is the closest Michael has been to the Kansas State Beasley in his career,’’ one team executive who speaks to Riley said. “It kind of justifies Miami’s pick, showing his innate scoring ability, how he can score so many ways. He’s been in Miami three times, so there’s always been a mutual attraction between Pat and Michael.”

Beasley will get the chance to prove to Spoelstra that he has developed into a valuable player this Friday night when the Knicks travel to Miami to take on the Heat. It can be guaranteed, however, that Spoelstra will focus on securing the victory rather than settling a score with his former player.
[xyz-ihs snippet=”Responsive-ImagenText”]