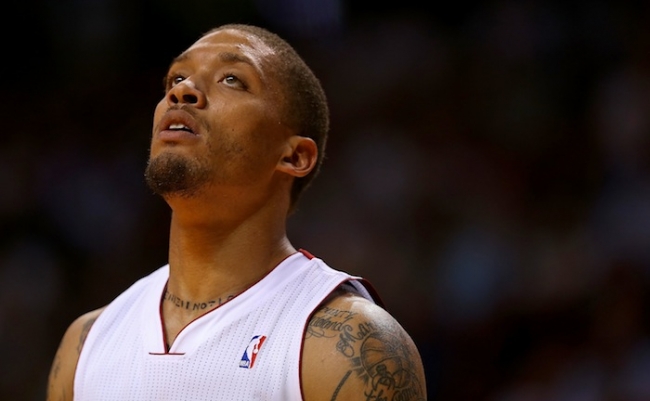 It would seem Michael Beasley’s third stint with the Miami Heat has come to an end.

Ethan Skolnick of Bleacher Report has reported through Twitter that the Heat will not be exercising their option to bring back Beasley for the 2015-16 season.

The Heat will not be exercising their option to retain Michael Beasley, as was likely clear from his IG post

The team held an option to bring back the veteran small forward at a salary of just under $1.3 million for the 2015-16 season, but with the selection of Justise Winslow at the No. 10 overall pick in this past Thursday’s draft, it made Beasley expendable.

The former No. 2 overall pick was signed in late February after Chris Bosh was ruled out for the rest of the season due to a blood clots ailment. As the Heat’s top offensive option off the bench, he averaged 8.8 points in 26 appearances, including a season-high 34 points, 11 rebounds and eight assists in the season-finale victory over the Philadelphia 76ers.

However, with Luol Deng still a possibility to return to the Heat, and with Winslow, Henry Walker and James Ennis as the other small forwards on the roster, there was just very little room to retain Beasley.

Considering his positive relationship with the organization and Head Coach Erik Spoelstra, the seven-year veteran is always a possibility to return to the team at some point during the season if the Heat need help.
[xyz-ihs snippet=”Responsive-Ad”]