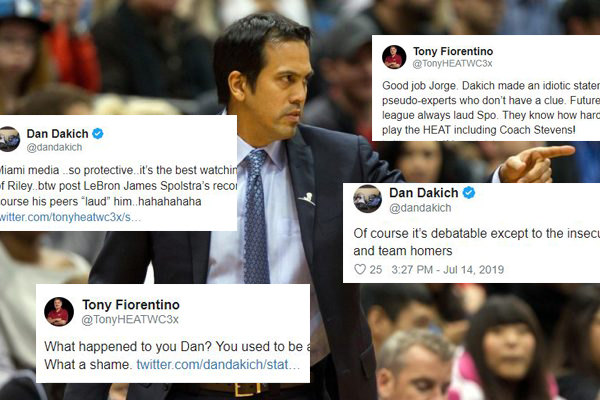 Tony Fiorentino came to the aid of Miami Heat head coach Erik Spoelstra by calling out Dan Dakich for his comments during the Las Vegas Summer League quarterfinal game on Saturday.

. @SedanoESPN almost had to fight @dandakich on air for saying Erik Spoelstra wasn't a top ten coach in the league and that Brad Stevens was a better coach than Spo pic.twitter.com/iAbcCzZj1x

Dakich’s argument became even more ludicrous when he said that Spoelstra may not be among the top 10 coaches in the league.

Fiorentino was one of the original Heat employees from the franchise’s first year in the league during the 1988-89 season. He worked as the Heat’s color commentator for television alongside play-by-play announcer Eric Reid for 15 seasons.

Good job Jorge. Dakich made an idiotic statement. Gotta love pseudo-experts who don’t have a clue. Future HOF coaches in the league always laud Spo. They know how hard it is to prepare to play the HEAT including Coach Stevens! https://t.co/fZm2A5bwIC

You should know better being a former coach. If you spent some time with Coach Spoelstra and watched him work, you would completely change your tune. Right now, YOU sound like an uninformed media type. https://t.co/VcG9kMJi3l

What happened to you Dan? You used to be a respected coach. What a shame. https://t.co/N4F1GKM2Z4

You came at me and really I have know idea who you are so I’d simply ask when did you become such a sad homer? https://t.co/pH4JDGJrSP

Nice try Dan. You have no clue what you are talking about regarding Coach Spoelstra. Period. https://t.co/a7qmM6y0jZ

Sure I do..absolutely not top 2 or 3 in the league and possible Top 10 NBA coach as he has gone 209-201 since James w couple 10th place finishes and of course it can be debated by everyone except those of you that are blinded by being homers..no worries as I said you came at me https://t.co/fkw29ECNyW

With all due respect I will go with Pat Riley’s opinion of Coach Spoelstra over yours. Enough said. I’m done. https://t.co/RFHPmGH3fg

Dakich continued to defend his stance on Twitter and didn’t back down one bit. Moreover, he appeared to be more determined than ever to prove that his argument was correct and that Miami media is merely scared of Heat president Pat Riley.

The debate has seemingly ended between the two, but this argument could spark a discussion between other members of the media in the coming days.