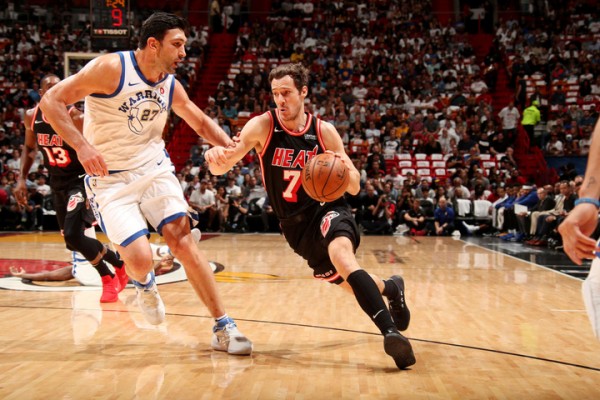 (Miami, FL) – The Miami Heat aimed to make a statement against the Golden State Warriors on Sunday night. While they did make a statement, it certainly wasn’t the kind they had hoped for as the Heat fell apart early in the second half on their way to their third blowout loss in four games, 123-95.

“Each game is different, I don’t see necessarily trends,” Heat head coach Erik Spoelstra said following the loss. “But we’re going to dig in and find solutions and find a way collectively that we can get to more consistency. That’s the bottom line. We’ve been saying it enough but we’ll find a way to get that done.”

The Heat had battled toe to toe with the Warriors early in the contest, and had led by as many as seven points in the first quarter of the game. In the second quarter, however, the Warriors went on a 12-3 run to bring the game to within two points, 36-34. While the Warriors had yet to claim the lead, their scoring run was only a sign of things to come.

In the remaining minutes of the first half, both teams traded shots and the lead as each vied for an advantage. The Heat just missed out on a halftime momentum swing when a Josh Richardson would-be buzzer-beater was called off by the referees. Still, Miami was down just two points at the end of the first half, 62-60, and it looked like the hometown crowd was in for a fantastic second half. Unfortunately, that would be the closest the Heat would get to the lead for the rest of the game.

The blowout began early in the second half when the defending NBA champions went on a 12-2 run in the first two minutes of the third period. The Heat attempted to chip away at the growing lead, but the Warriors simply could not be stopped. They began to lock down defensively and continued to hit their shots to extend their run and push their lead to 20 points, 87-67, with just under five minutes to play in the third period. By the time the quarter had come to an end, the Heat were down 22 points and the game was all but sealed.

The largest deficit the struggling Miami squad faced in the game came with just under a minute to play when the Heat faced a 33-point deficit, 123-90. While they were able to bring the loss to within 30 points, it was another embarrassing display as the home crowd began to file out of American Airlines Arena well before the final buzzer.

While there was not much positivity to glean from this contest for the Miami faithful, there were some promising aspects of the game. Point guard Goran Dragic got his scoring back on track after a three-game drought and finished Sunday’s matchup with 20 points, three rebounds, and two steals. Richardson also had a fairly productive day shooting the basketball, and while it wasn’t quite the 27-point offensive explosion he had enjoyed on Friday night, he finished the game with a respectable 12 points on 5-for-11 shooting. Finally, while Bam Adebayo‘s stat line of nine points and two rebounds did not jump off the page, the rookie big man showed flashes of incredible play that could make him quite a force as he continues to learn in the NBA.

As the score indicates, there were much more negatives than positives in Sunday’s loss. Dion Waiters was ice-cold throughout and finished the game with just four points on a dismal 1-for-10 shooting from the field. James Johnson struggled as well and failed to live up to his title of team captain on his way to a five-point, five-rebound performance.

Perhaps most disappointing was the Heat’s inability to slow down the Warriors’ star players. Stephen Curry lit up the court with a 30-point night. Kevin Durant added 24 points and seven assists, and Klay Thompson contributed 19 points of his own. While Draymond Green was kept in check, the Warriors offense showed no signs of slowing down all game.

“The first half we competed with them,” Dragic, who was charged with defending Curry for much of the game, said. “Second half, we didn’t.”

Sunday night’s was as lopsided a game as any for the Heat this season. It may be hard to rebound from a loss such as this, but that is exactly what Miami will have to do if they hope to stand a chance in their next game on Wednesday when they travel to San Antonio to face off against the Spurs.
[xyz-ihs snippet=”HN-300×250-TextnImage”]