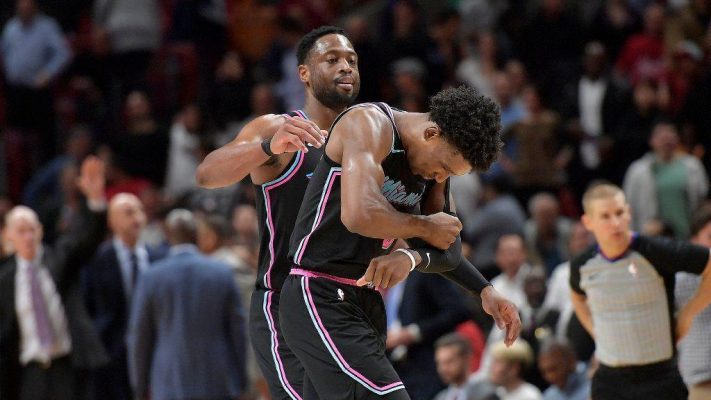 Time and again, when the game has been on the line, Miami Heat guard Dwyane Wade has come up clutch.

With the clock winding down and the Heat trailing the Atlanta Hawks 115-113 on Tueday night, everything looked primed for a classic Wade moment.

Wade got the ball, pump faked a defender and found himself with an open shot.

But he passed the ball to a wide-open Josh Richardson, who was locked and loaded behind the three-point line. The young wing’s shot could have won the game. Instead, it clanged off the rim, and Atlanta got the rebound. The game subsequently ended after that.

Wade came over to a disconsolate Richardson and put his arms around him.

That pass and embrace spoke volumes about Wade’s assessment of his role this season in Miami.

“It’s trying to continue to build him (Richardson) to be hopefully the focal point of this franchise,” Wade said. “All year, he’s had big shots and big moments, and I’ve gotten out of his way on a lot of them. I had an opportunity at that point where I had an open shot after I shot faked him, but I decided to go to the young fella for him to bring it home for us. And I would do it again and again.”

Richardson, Miami’s second-round pick in 2015, has been one of the few bright spots in a disappointing start for the Heat. The 25-year-old is putting up 20.5 points per game while dropping 3.3 dimes and shooting a fiery 42.2 percent from beyond the arc.

The season has had its frustrations. Richardson was fined $25,000 for throwing a shoe into the crowd during the Heat’s blowout loss to LeBron James and the Los Angeles Lakers. But it’s clear that everyone in the Heat organization is doing their best to help the blossoming shooting guard succeed.

Heat head coach Erik Spoelstra even flew out to California in June to meet with Richardson and prepare him for the greater burden he is now having to carry. And Heat president Pat Riley has praised the fourth-year player for being “very effective.”

But perhaps nothing is better for a young player’s confidence than the support of an NBA legend, and that’s what Wade is here to give.

“Obviously, we all want to make every shot, and I probably would’ve been the same way, but just let him know, nine times out of 10, he’s making that shot,” Wade said. “It’s a wide-open look. Great shot. We work on it every day. Law of averages, you’re not going to hit every one of them.”