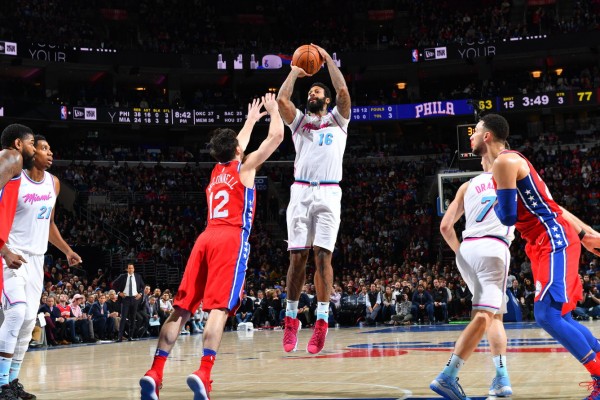 (Philadelphia, PA) — Watching a 24-point second-half lead completely disappear, the Miami Heat endured a brutal collapse in losing to the Philadelphia 76ers by a score of 104-102 at Wells Fargo Center on Wednesday night. The devastating loss sends Miami into the All-Star break having dropped seven of their last eight contests.

Miami was cruising along, holding a 68-44 lead with 9:13 left in the third quarter. However, in a span of just over two minutes, that lead was chopped in half to 68-56, thanks to 12 unanswered points by Philadelphia. By the time the period had ended, the once-comfortable Heat lead had diminished to just eight at 81-73.

This portion of the slide was the result of a steep drop in field-goal shooting for the Heat, who had hit at a 52 percent rate during the first half. That downturn resulted in them hitting on just 7-of-19 from the field in the third and was hurt further by the 76ers’ continued dominance on the glass. That latter category had Philly with a 16-5 advantage over those 12 minutes.

“We had a lead, but you give up that many rebounds, a team’s going to come back, especially at home,” Dwyane Wade said.

The Heat’s struggles then continued into the final quarter as they watched their lead precipitously drop until the 76ers managed to tie the game at 90 apiece with 5:46 left. Philadelphia pushed ahead and completed an 18-5 run to hold a 100-94 lead with 2:25 remaining. Wade then managed to run off five consecutive points to make it a one-point game with 1:26 to play, but despite a 76ers turnover, Miami was unable to take the lead.

The 76ers’ J.J. Redick then hit a jumper with 20 seconds to go to move their lead back up to three, with a Heat miss by Wade resulting in a pair of free throws by the 76ers that appeared to clinch the game at 104-99. Yet Miami wasn’t done, with Tyler Johnson‘s 3-pointer with 4.8 seconds to play making it a 104-102 game, which was subsequently followed by a turnover with 3.3 seconds remaining. That call had to be overturned to give the Heat their chance, but Wade’s 3-pointer came up short.

“If I could have paused it in mid-air and bet on it, I would have put all my contracts on it and I’d be broke,” Wade said of the confidence he had in that last attempt. “I thought that was in.”

One of the chief issues on offense for Miami was the fact that a full two-thirds of their entire scoring output was compiled by just four players. James Johnson came off the bench to lead the Heat with 22 points, while Goran Dragic contributed 18 on the night. That was followed by Hassan Whiteside‘s double-double of 16 points and 10 rebounds and Johnson’s 12.

“We need to do a better job of boxing out,” Dragic said of the huge rebounding disparity. “Most of those balls came out long, so the guards need to clean this stuff up.”

During the opening quarter, the Heat put together a 20-7 run that gave the visitors a double-digit lead at 27-16 and a 29-20 advantage when the period came to an end. Building that lead was the byproduct of Miami’s 55 percent shooting from the field, while holding Philadelphia to just 33 percent in that category.

That push by the Heat continued into the second quarter as they progressively built the margin to 23 by halftime, holding a 62-39 lead. The statistical numbers for both squads in the area of shooting from the field were virtually identical.

That first-half defense applied by the Heat was especially aggravating for the 76ers, who managed to collect 13 rebounds on the offensive glass during that time frame. Coupled with those missed opportunities were the 10 turnovers they committed in that same stretch. By the time the game had ended, the Sixers held a 23-3 advantage on the offensive glass and 60-29 overall.

“Frankly, we didn’t deserve to win when you get crushed like that on the glass, including the loose balls,” Heat head coach Erik Spoelstra said. “That’s a tough lesson, we’ve had rebounding games like that.”

The loss was reminiscent of Miami’s last trip to Philadelphia, except that they were the team making the late comeback in that instance. The difference in that case was that the Heat’s effort ended up falling short.

“Losing seven of the last eight, we just need to come back with a fresh mindset,” Wade said. “We’ve got to get out there and get to it. We’re playing for something.”

Miami will now be off until a week from Friday when they get back into action on the road against the New Orleans Pelicans. Tipoff for that matchup will be just after 8 p.m.
[xyz-ihs snippet=”HN-300×250-TextnImage”]