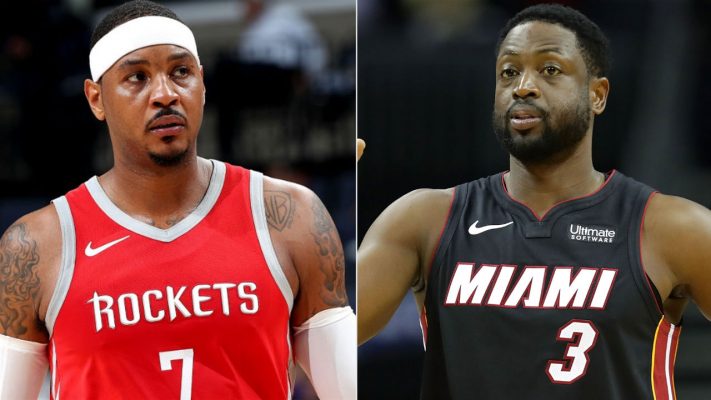 The NBA is a brotherhood.

After reports surfaced that the struggling Houston Rockets and Carmelo Anthony will soon part ways, Miami Heat guard Dwyane Wade chimed in on the situation on Twitter:

Trying to make my guy @carmeloanthony the fall guy huh!? Man y’all need to stop. That’s the easy way out instead of addressing what the real problem.

Wade and Anthony, who both came out of the same 2003 draft class, are very close friends. While both players have had successful careers, their paths and circumstances have been very different. Wade has three championships, has been to the NBA Finals five times and is the face of the Heat franchise. Anthony, on the other hand, has never been to the NBA Finals and has been on multiple teams during his his 16-year career.

Although Anthony has been plagued by drama and chemistry issues over the last few years, the forward is one of the best players of this generation. The elite shooter has career averages of 24.0 points, 6.5 rebounds and 3.0 assists, and is third among active scorers behind LeBron James and Dirk Nowitzki with 25,551 points.

If the 34-year-old and Rockets do end up parting ways, it wouldn’t be a complete shock if the Heat were to contact the veteran. Over the summer, Heat president Pat Riley and Anthony met up together in Las Vegas to talk about a potential signing. If Anthony chooses to look for a stable organization with teammates who will stick up for him, he’ll find loyalty with the Heat and backup with Wade.
[xyz-ihs snippet=”HN-300×250-TextnImage”]