Dwyane Wade Takes Shot at Media and Their Made-Up ‘Sources’ 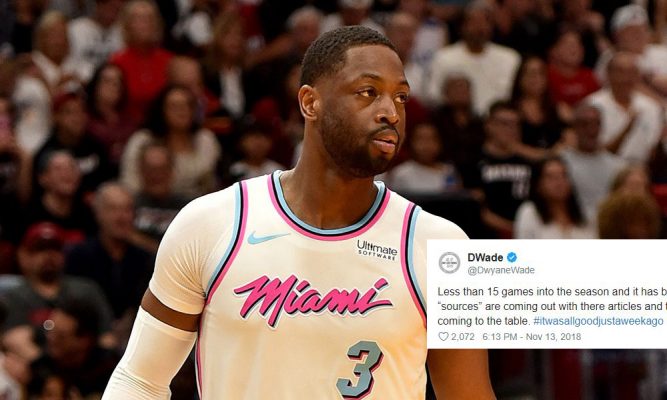 There have been a few recent rumors and reports that have painted the Miami Heat as an organization in peril, and Dwyane Wade has had enough of it.

On Tuesday night, the three-time NBA champion took to Twitter to speak out against articles that he seems to think are baseless when it comes to fact.

Less than 15 games into the season and it has begun. The “sources” are coming out with there articles and the issues are coming to the table. #itwasallgoodjustaweekago

Wade has never been one to shy away from letting his thoughts and opinion be heard, and this tweet is no exception. Based on the tweet, it’s possible that Wade is saying that a recent report detailing Miami’s dire need for a trade has been made up to drive a specific narrative.

Regardless of Wade’s opinion of the report, it is starting to seem like some changes may need to happen in Miami.

The hope of a Jimmy Butler trade is now a thing of the past, and Miami is currently on the outside looking in at not only the upper echelon of the Eastern Conference, but a playoff berth as well.

Wade certainly has a right to be angry about unnamed sources leaking to the press, but his anger won’t change the fact that all does not seem right in South Florida for the time being.
[xyz-ihs snippet=”HN-300×250-TextnImage”]