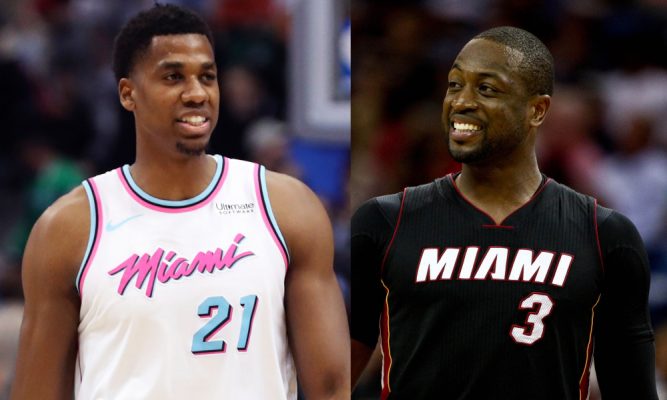 Being a team leader isn’t always easy, and for Miami Heat legend Dwyane Wade, that sometimes means doing things you don’t necessarily want to do.

That kind of event took place this summer, shortly after big man Hassan Whiteside met with Heat head coach Erik Spoelstra in an attempt to clear the air after a very disappointing 2017-18 season for the 7-foot center.

Beyond that, he also served as a distraction off the court on several different occasions,.

According Bleacher Report’s Tom Haberstroh, Whiteside began reaching out to his fellow teammates following his meeting with Spoelstra in an attempt to mend fences this offseason.

Earlier this summer, Whiteside texted all of his teammates to tell them that he had scheduled a South Beach workout with his skills trainer Gabe Blair and fitness guru Tony Thomas. Below is how the messages were exchanged, according to Haberstroh:

“For over an hour, no one responded to Whiteside’s text. Not one teammate.

“The next morning, when Whiteside showed up early with Blair at 7:45, Wade was already there, ready to go at Ninth and Collins. Heat guard Rodney McGruder arrived shortly thereafter. And so the four of them went to work. Push-ups. Bear crawls. Agility drills. Sprints. Core workouts. The works.

“‘It was tough; it was definitely the last thing I wanted to do,’ Wade says now, laughing. ‘But definitely glad I did it. I made sure I was there. I wanted him to know I’ll be there for him.’

“Wade’s presence made an imprint on Whiteside.

“’That’s what a leader does,’ Blair says. ‘The little things that doesn’t show up in the box score but means way more than any statistic.’”

If this anecdote proves anything, it’s that Whiteside is looking to get his career with the Heat back on track. It also proves that despite his advanced age, Wade is taking his role as team leader as seriously as ever.

Hopefully Wade can continue to serve as a positive force in the Miami locker room as Whiteside and many other talented youngsters on the roster look to take the next leap in their promising NBA careers.
[xyz-ihs snippet=”HN-300×250-TextnImage”]