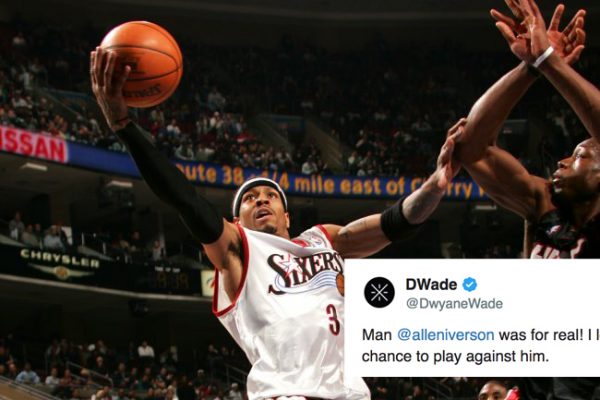 Dwyane Wade paid tribute to Hall of Fame shooting guard Allen Iverson on Sunday on Twitter after a fan tweeted out a highlight video of a game where the two went toe to toe back in 2005, which was Wade’s second year in the NBA.

Man @alleniverson was for real! I loved each moment i had a chance to play against him. https://t.co/lQRlP6hsoE

In that game, Wade finished with 48 points, which at the time set a new career-high, ten rebounds and six assists as the Miami Heat lost to the Philadelphia 76ers in overtime by a score of 126-119. Iverson, who played the entire game, finished with 38 points, 16 assists and six rebounds.

The highlights of that game can be seen in the video below.

Iverson and Wade played together on the United States men’s basketball team during the 2004 Summer Olympics, where the USA won a bronze medal after losing to the eventual gold medalists Argentina in the semifinals. Iverson led the team in scoring (13.8 points per game) while Wade led the team in steals per game with 2.1. That team also included LeBron James, Shawn Marion, Lamar Odom, and Amar’e Stoudemire, all of whom have played for the Heat in their careers.

The 6-foot Iverson retired officially back in 2013, although the last time he played professionally was in 2011 with a Turkish team called Beşiktaş. His last game in the NBA came in 2010 with the 76ers, the team who he spent the most of his 14-year NBA career with.

As for the three-time NBA champion, he has yet to decide on whether or not he will come back and play a 16th season in the NBA. Although there was a report that said he had agreed to return to the Heat for one final season, Wade himself reacted to those rumors by calling them “Fake News” on Twitter. With the regular season beginning soon, Wade will need to come to a decision soon about whether or not he will play for the Heat again.
[xyz-ihs snippet=”HN-300×250-TextnImage”]