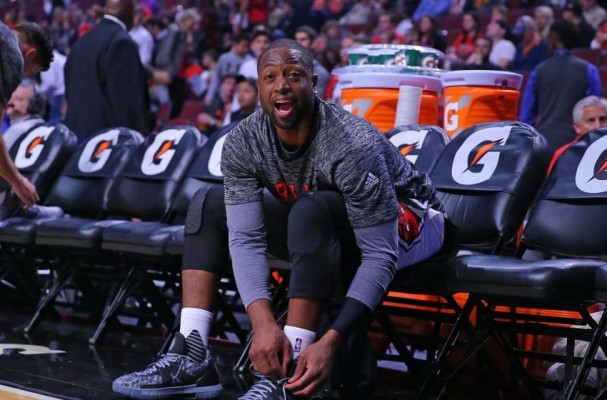 After 13 years of greatness, Dwyane Wade has moved on from the Miami Heat and has joined his hometown Chicago Bulls. Though the three-time NBA champion and Heat front office could not see eye to eye this past summer, Miami will always be a part of Wade and his celebrated legacy.

In fact, in an in-depth interview with Rohan Nadkarni of Sports Illustrated, Wade addresses the possibility of a potential return to Miami at some point in the future. After Nadkarni asks Wade if he’d ever play another game for the Heat, Wade responded by saying this:

“I don’t know. I never thought I would not be there. At this point in my career, I’ve been asked that, and it’s not a focus of mine. I’m happy where I am. I gave Miami everything I had for 13 years. The years I have left, hopefully I can give as much to Chicago. You never know what the future holds so you never want to say yes or no. Anything is possible. But, I’m cool right now. I’m good.”

So, while Wade sounds like he is content in Chicago for the time being, he does leave open a sliver of possibility regarding an eventual return to the place where he made his name.

At an earlier point in the interview, Wade was asked how he felt about the Heat organization as a whole, and despite the fact that he may not have left on very good terms, Wade assured that he has nothing but love for the Heat:

“I have a lot of people in that organization I’m still in communication with because they’re friends or they’re family. You know, it’s a business hat that people have to put on. And I’m a businessman so I understand it. From a standpoint of relationships that I’ve built, the real relationships will stand the test of anything.”

Wade is under contract with Chicago for the next two years and he has maintained the stance that he’s fully focused on the Bulls right now, but it’s understandable that he wants to leave the door open for the possibility of a return, considering the relationships he’s built in Miami and what he’s achieved with the Heat over the past 13 years.
[xyz-ihs snippet=”Responsive-ImagenText”]