Don't Miss
Home / Media / Pat Riley on Bringing Dwyane Wade Back: ‘I Should Have Tried To Do Everything’

Pat Riley on Bringing Dwyane Wade Back: ‘I Should Have Tried To Do Everything’ 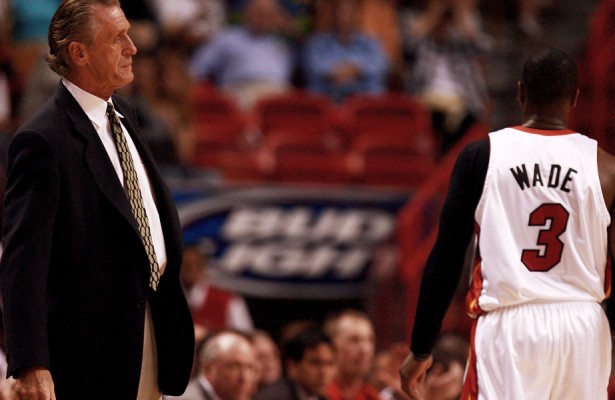 “We had a tough summer. Period,” Pat Riley began.

Riley spoke for the first time since Dwyane Wade‘s departure today. The press conference was very different than the one he held two months ago during the team’s exit interviews. This time around there was no talk of whales, but instead a melancholy vibe full of regrets.

Riley reassured those gathered that this wasn’t the first time the Heat had a star player leave, but admitted, this time was different.

“I have been here when Zo (Alonzo Mourning) left, Shaq (Shaquille O’Neal) left, when Brian Grant, Eddie Jones. But Dwyane is unique. There will always be a key under the mat. I just hope it doesn’t get too rusty,” Riley reminisced.

Riley tried to explain how he and Wade seemed to be on different frequencies for the past couple years. He thought that once Wade had chosen his thought process it would be hard to change his mind. Since the money pretty much evens out, after accounting for Illinois’ state taxes, it was clear that Wade wasn’t leaving just because of the money.

“You get to a point as a man in your life where your thinking or thought processes change. This was not about money [with Wade]. This was about something else. I more than he, because he’s the asset, he’s the star, he’s the face of the franchise, I should have tried to do everything I could have verbally in trying to change his mindset to mine or big picture or better picture or one I thought would help him end his career and also get him financially the money he needed and wanted,” said Riley.

With Wade officially signing with the Chicago Bulls yesterday, Riley was already looking to the young core of this team to step up next season. He talked about how he believed that Justise Winslow is ready to step into a starting role for this team.

“Are we ready for Justise Winslow to start at the 3? I am. I’m not just throwing him out there. This guy has been thrown out there last year and played significant minutes and significant times. I trust him,” said Riley.

As far as any update on Chris Bosh‘s health, Riley was neutral and did not commit to the veteran returning next season. Publicly, the Heat have pushed back the timeline on announcing a decision since Bosh’s condition was reported. Also, Riley remained non-committal about whether Bosh could return on special conditions (home games, staggered schedules, etc.).

“It’s always fluid. It always has been since there was a diagnosis and a decision for him not to play the rest of the season. It’s a positive environment right now with Chris and his doctors. Our doctors are constantly communicating, more so now than ever. I know Chris wants to play. Obviously, we would be open to that but this is still a very fluid situation. On this day, there is not an answer. I wish I could give you one,” said Riley.

Clearly, the Heat’s summer could have gone much better, and Riley acknowledged as much, but he also focused on the positives of the upcoming season. At one point, he said he would take the group of young guys he had (Hassan Whiteside, Winslow, Josh Richardson, Tyler Johnson) against any other young group in the league.

However, Riley knows that Erik Spoelstra will have a tall task to get this team to the playoffs saying “his work is cut out for him this year.” After the dust has settled, Heat fans should acknowledge that Riley may not have had the best offseason, but there will be some exciting young pieces to watch next year.
[xyz-ihs snippet=”Responsive-ImagenText”]

dwyane wadeerik spoelstraFeaturedfree agencyNews Tickerpat riley
← Previous Story Udonis Haslem Shuts Down Hater Who Calls Him Old and ‘Useless’
Next Story → Tyler Johnson on Recent $50 Million Contract: ‘They Got Me for a Steal’