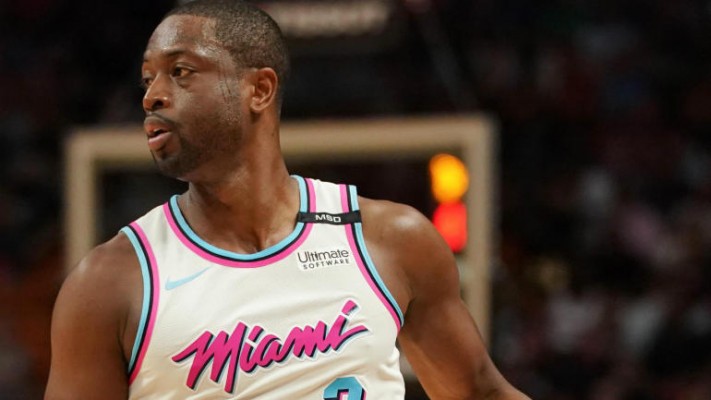 While everyone in South Florida is ecstatic to see Dwyane Wade suiting up in a Miami Heat jersey once again, it seems the three-time NBA champion is the happiest.

The Heat legend recently sat down with Yahoo Sports to discuss his reunion with the team that drafted him back in 2003, how he knew he was ready to return, and what it’s been like to be back with the organization that helped make him a star.

“I was birthed here,” Wade told Yahoo Sports. “This was all I knew. You might’ve heard Coach [Erik Spoelstra] or Pat Riley say, ‘This is not for everybody here.’ And it’s not. But it’s for me.”

Following 13 seasons with the Heat, Wade left to play for the Chicago Bulls in 2016. His tenure with Chicago would last just one season before he was granted a contract buyout and opted to sign with the Cleveland Cavaliers to play with his former teammate and close friend LeBron James. The two had won two championships in four years as members of the Heat, but their partnership in Cleveland proved far less fruitful.

The frustration from a lack of success in Cleveland culminated in outright tragedy when Wade’s former agent and longtime mentor, Henry Thomas, passed away. It was that loss that helped Wade realize how special of an organization Miami truly was.

“I think I had a little depression that last couple of days in Cleveland,” Wade said. “This definitely gave me a little jolt. I’ve never lost anyone close to me, that I loved. So this definitely has taken a little time to get over. But being back here kind of helps that, being in my environment, my comfort zone with people that love me and that I love. That was a sad moment.”

It was actually at Thomas’ funeral that Wade realized that even though he and Riley had not always seen eye to eye, their relationship was closer to family than it was to business.

“It sounds simple. But it’s like, sometimes, as a kid, you just need that embrace from your father,” Wade recounted. “Him (Riley) coming to my agent’s funeral, a very vulnerable time for myself and [Udonis Haslem, who was also represented by Thomas], meant a lot to me. Just that warm embrace meant a lot to me as well. You know the business can get in the way. I understand that. I made the decision I made [to leave], but at the end of the day, I know that guy [Riley] would run through a brick wall for me. And this organization would. It felt right. I think that had a big thing to do with this trade happening to bring me back at this time.”

Now, nearly 20 games into his second stint with the Heat, the 12-time All-Star realizes that he needed to leave Miami to realize just how special it was.

“Going out to different teams, for me, was something personally, I needed to do,” Wade said. “But also you get to see you’re missing some things that helped you become the player you have been. The place you can get it back is here. I definitely miss a lot of things. We talk about the culture. We talk about accountability. Structure. It’s everything. I missed that, because even though I went out there and got a little bit more freedom, from a basketball standpoint, I missed the things that made me successful.”

Upon his return, Wade has proven that he’s no slouch despite his advanced age. In the month of March, Wade has averaged 14.3 points, 3.1 rebounds, and 3.0 assists per game. Still, as the Heat prepare for what is all but a guaranteed spot in the upcoming playoffs, his largest contribution for the team may not be what he contributes to the box score, but what he contributes in terms of experience and veteran leadership.

According to Wade, he seems more than happy to offer all he can to the people and organization that have given him so much in his career and his life.

“I always say, as long as you stay in this league, you’ll see stuff you never thought you would. It’s a little easier coming back to Miami. If I was going anywhere else, it would’ve been a little bit tougher,” Wade said. “I can’t wrap [the year] up yet, because it’s been ongoing. But it’s been a life experience, man, that I appreciate. Because it’s all about the journey of life. You see who you are when you go through times. I definitely learned a lot about myself. I definitely have appreciated people a little bit more, the ones who have been there for me in tough times.”

Considering the current Eastern Conference standings, it would be quite the surprise to see the Heat go all that deep in the upcoming playoffs. Regardless of how this season ends, however, it’s clear that Wade will consider it a success.
[xyz-ihs snippet=”HN-300×250-TextnImage”]