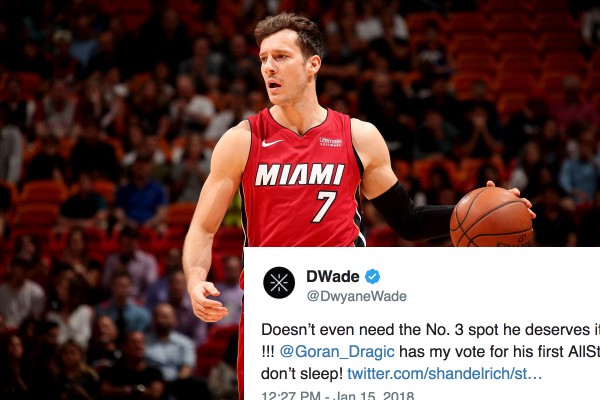 The Miami Heat are currently enjoying a seven-game winning streak and point guard Goran Dragic is certainly getting quite a lot of credit for it. On Monday, Dragic was rewarded for his recent performances when he was named the Eastern Conference Player of the Week.

It didn’t take long for Heat legend Dwyane Wade to notice. He quickly took to Twitter to celebrate his former teammate’s success.

Doesn’t even need the No. 3 spot he deserves it now! Congrts ?!!! @Goran_Dragic has my vote for his first AllStar game. Coaches don’t sleep! https://t.co/gq2n1o32KW

Dragic and Wade played together for a portion of the 2014-15 season and the entirety of the 2015-16 season in Miami and it’s clear that Wade has a lot of respect for the veteran guard.

This is the second time this season that Dragic has been named the Player of the Week in the Eastern Conference, with the first time coming back in late November. He deserved the award then and he certainly deserves it now. Last week, Dragic averaged 23.0 points, 6.0 rebounds, and 5.0 assists per game, and came up huge in clutch moments of all three games.

Dragic will look to continue his recent success as he and the Heat look to extend their winning streak to eight games this afternoon against the Chicago Bulls.
[xyz-ihs snippet=”HN-300×250-TextnImage”]