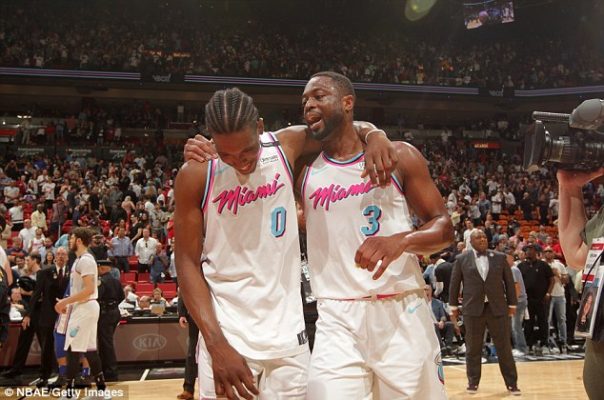 In the past few seasons, Miami Heat star Josh Richardson has gone from a being promising youngster, to becoming the leading scorer on a serious playoff contender. That role comes with quite a bit of responsibility, and according to a recent report, Richardson made a pact with Dwyane Wade prior to the 2018-19 season to hold regular discussions so he could learn all he could from the Heat legend.

“Richardson and veteran guard Dwyane Wade made a pact before the season to have discussions regularly,” The Athletic’s Shandel Richardson wrote. “The meetings still occur, with Richardson hoping to pick up any pointers from a future Hall of Famer on being a primary scorer.”

For Wade, these meetings signify a way for him to pass on what he has learned during his storied NBA career before he retires at the end of this season.

“As the season continues on, you just want to continue to pass on something to the next generation,” Wade said. “It could be something real small, simple as just shooting with him or something intense as film sessions.”

Richardson seems to be constantly looking for ways to get better, knowing that his improved shooting can also positively impact the rest of his game.

“I think there have times I’ve been through lulls and I can’t have those,” Richardson said. “I think my rebounding numbers need to be up a little bit more but I think I’ve learned a lot.

“At first, I was learning how to score more. I had to teach myself to shoot more. Now, this last month I’ve learned how to facilitate better. I got my assists up, my turnovers down. I’m just going to attack another area of the game this month and see if I can put it all together.”

At the moment, Richardson is averaging 18.5 points, 3.9 rebounds, and 3.7 assists per game. While he is not quite a household name for fans around the NBA, his value to the Heat was made clear earlier this season when they displayed very real reluctance to include Richardson in a potential trade deal for All-Star forward Jimmy Butler.

Still, Richardson admits that he is still learning how to be the best offensive player he can be.

“You’ve just got to learn how to do it,” he said. “It’s a learned talent. I didn’t know how different it would be when the shots aren’t falling. You just have to keep doing it.”

In the end, it’s less about personal success for Richardson and much more about team success.

“You’ve got a lot of guys who can hurt you in a lot of different ways,” Richardson said. “There’s no real one guy who is just the man on the team. I think that’s the strength for us. People have to pay attention to everybody else. But it’s also because we’re winning, too. I think that has a lot to do with it.”

While there’s little doubt that he and Wade have discussed valuing team success over personal success, that mentality has seemingly always been present for Richardson. It’s part of what makes him such a fantastic fit in South Florida.
[xyz-ihs snippet=”HN-300×250-TextnImage”]