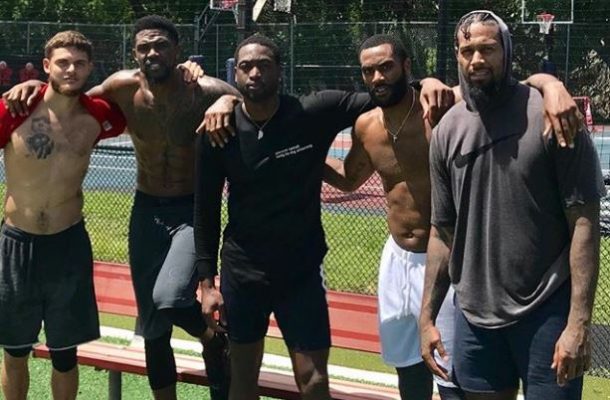 The NBA is enjoying one of the quieter months of the league calendar, but that doesn’t mean that members of the Miami Heat aren’t getting their workouts in.

On Tuesday, Udonis Haslem took to Instagram to share a picture of himself posing with several of his Miami teammates from last season including Tyler Johnson, Wayne Ellington, James Johnson, and Dwyane Wade.

It's just work!! Never a question if they wit da ish!! Even that disrespectful sun couldn't stop us!! #nowwhat #og

It’s not surprising to see that James Johnson, Tyler Johnson, and Ellington are working out and staying sharp during the offseason. After all, Heat training camp is just over a month away.

For Haslem and Wade, however, their participation is much more of a welcome surprise. While both Heat legends currently remain unsigned, the fact that they are not only staying shape, but doing so with members of the Heat roster seems to indicate that they are both seriously considering coming back for another season.

While Wade recently stated that he is not feeling the pressure to make a final decision anytime soon, it seems this photo may have tipped both his and Haslem’s hand.
[xyz-ihs snippet=”HN-300×250-TextnImage”]