The Latest on Dwyane Wade’s Future With the Miami Heat 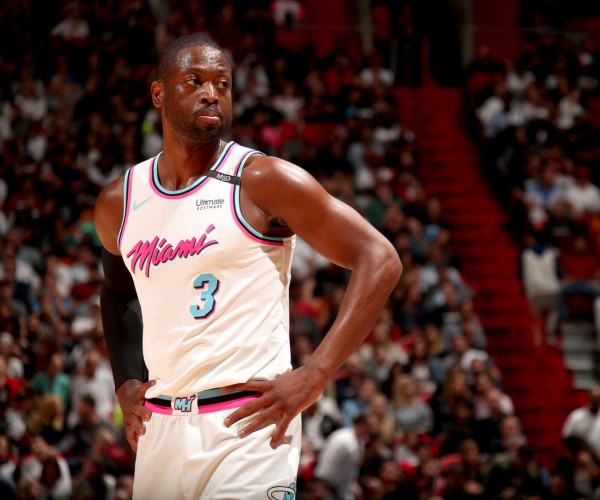 While the Miami Heat have not had the most active offseason, fans are still waiting on some pretty huge news. That news relates to whether Dwyane Wade will ultimately decide to continue his NBA career, play overseas, or retire from the game of basketball altogether.

While Wade has yet to make a final decision about his career, he does seem to be narrowing down what he wants for his future.

Dwyane Wade says he still hasn’t reached a decision about his basketball future. If he does play he says it will definitely be in a #Heat uniform. pic.twitter.com/Q9AA36cwPC

Asked @DwyaneWade if he might play in China: “Heat only. If I play the game of basketball this year it will be in a Miami uniform. If I don’t I’ll be living in Miami or somewhere else probably.” pic.twitter.com/HihDxfMfvM

It’s great to hear that Wade will either be playing in South Florida, or not at all next season, and it appears as though the three-time NBA champion is getting closer to figuring out what he wants to do.

Still, Wade added that he is not yet feeling any pressure to make a final decision.

Asked @DwyaneWade if there’s a signing date in his mind: “When the decision needs to be made it will be made. It’s different now. It’s not like we’re sitting down trying to figure out a $100M contract and I need to sign it by July 8th. So we have time.” pic.twitter.com/32ucBQsj84

Wade had an up-and-down 2017-18 campaign. While he started out slowly as a member of the Cleveland Cavaliers, he certainly showed glimpses of the abilities he possessed during his prime once he was traded to the Heat.

That resurgence culminated with several strong performances in the Heat’s playoff series against the Philadelphia 76ers. In Game 2, Wade pushed the Heat to a win with 28 points, seven rebounds, and three assists. In Game 4, he nearly did the same when he dropped 25 points in a contest that Miami ended up losing by just four points.

Last season, Wade proved that he still possesses the talent and grit to be a force in the NBA. All that’s left is for him to decide whether or not he is willing to commit to one more.
[xyz-ihs snippet=”HN-300×250-TextnImage”]