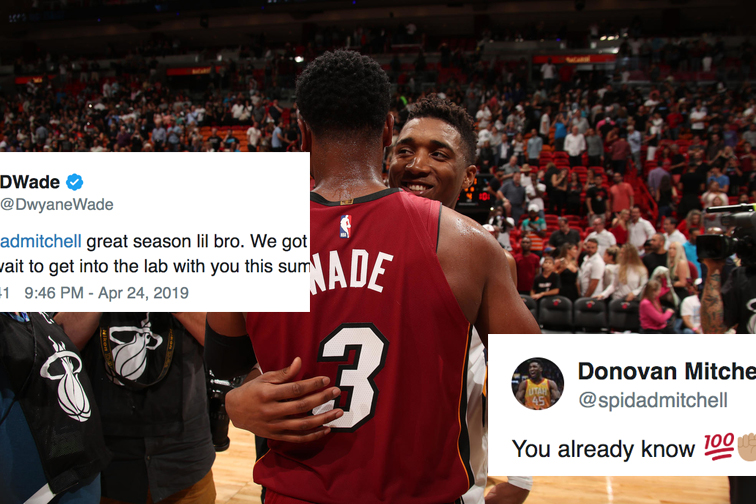 Dwyane Wade is no longer in the NBA, but it looks like he won’t be staying far away from the league for long.

Following the conclusion of the Utah Jazz’s season, Wade reached out to star youngster Donovan Mitchell to invite him for some offseason training.

@spidadmitchell great season lil bro. We got more work to do i can’t wait to get into the lab with you this summer.

It wasn’t long before Mitchell responded to pencil the date in.

Wade and Mitchell have been close for quite some time, and it looks like Wade will have the time to commit to an even greater role as a mentor for Mitchell now that his NBA career has come to an end.

Earlier this season, Mitchell was one of the lucky recipients of a No. 3 Miami Heat jersey during one of Wade’s many jersey swaps.

Mitchell also spoke at length about the similarities between their games during All-Star Weekend.

“With Dwyane, man, you know, I went to the One Last Dance dinner last night and it was just sad for me. You know, growing up you watch him, they showed a video and I didn’t realize how many moments, how many plays we kind of like, ‘Man, I kind of do that.’ I never realized how close, you know, similar we are as players.

“Like I said, I’ve always gone to him for advice for whatever it is just asking him about life in this league. He won a championship in his third season. That’s extremely impressive. That’s one thing I’ve always really wanted to ask him about. As a young man, a young player in this league, he got the respect from guys like Shaq (Shaquille O’Neal), Tim Hardaway, Caron Butler. That’s impressive, that’s hard to do as a young guy, so for me to try and find ways to better myself and this being his last All-Star Game, it’s sad to see him go, but you know, I think he’ll go out with a bang this year.”

It looks like Mitchell is going to lean into those similarities and see all that he can learn from the surefire future Hall of Famer.
[xyz-ihs snippet=”HN-300×250-TextnImage”]