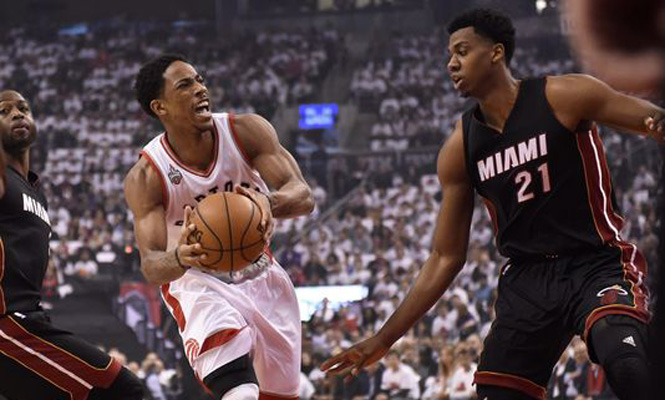 “Been big. You can obviously see who’s the dominant big out there rebounding and scoring.”

Valanciunas has certainly made an impact early on in this series. As arguably the team’s most consistent player during Game 2, the Lithuanian had 15 points and 12 rebounds in the win. While Whiteside is obviously the more dynamic blocker of the two, it was the Raptors big man who helped his team more in the closing moments of Thursday’s game.

With the Heat hosting Game 3 on Sunday at American Airlines Arena, Whiteside will likely come out more aggressive after this subtle verbal shot from DeRozan. The 7-foot center has faced nothing but adversity early on in his career and has tended to respond well to challenges.
[xyz-ihs snippet=”Responsive-Ad”]

DeMar DerozanFeaturedhassan whitesideJonas Valanciunasmiami heatNews Ticker
← Previous Story Erik Spoelstra Criticizes State of Coaching, Feels Grateful to Be with Heat
Next Story → Udonis Haslem: ‘Whoever I Play Against Is Gonna Get Hit’