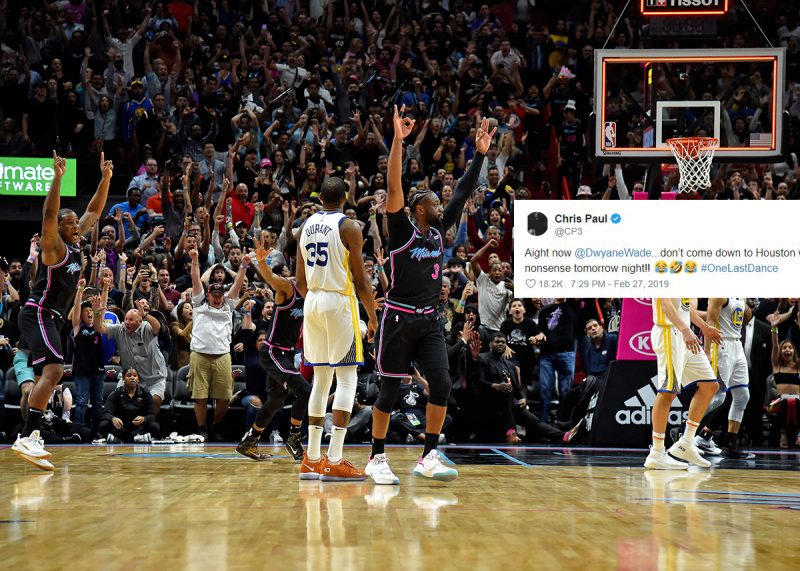 On Wednesday night, Miami Heat guard Dwyane Wade hit an incredible game-winning 3-pointer to beat the Golden State Warriors by a score of 126-125.

Aight now @DwyaneWade…don’t come down to Houston with that nonsense tomorrow night!! ??? #OneLastDance

The Rockets and Heat face off on Thursday night in what is likely Wade’s last ever NBA game in the city of Houston. The two teams already played each other this season in Miami on Dec. 20. The Heat won that game, 101-99, behind 22 points from Josh Richardson.

Paul has mentioned how much Wade means to him and how close the two truly are.

“D-Wade, I mean he is a brother to me,” said Paul. “Everything, from the injury he had, we all went to Chicago and worked out with him, to my wedding, his wedding, birth of our kids. We say it all the time, but we’re not just NBA friends. There’s a lot of guys in this league that are just teammates or NBA friends. But we all are a lot closer than that.”

Throughout their careers, Wade and Paul have played each other a total of 21 times, with all of their matchups coming in the regular season. In those games, Wade has averaged 20.8 points, 5.1 rebounds and 5.5 assists per game while winning seven of the games.

The two played together on the 2008 United States men’s national basketball team, which won a gold medal at the Olympics. Wade was that team’s leading scorer at 16.0 points per game while Paul led the team in assists per game with 4.1.

Houston and Miami’s Thursday night matchup is scheduled to tip off at 8 p.m. EST.
[xyz-ihs snippet=”HN-300×250-TextnImage”]