Don't Miss
Home / Media / Heat Nation Breakdown: How Did Brooklyn Get So Many Open Threes?

Heat Nation Breakdown: How Did Brooklyn Get So Many Open Threes? 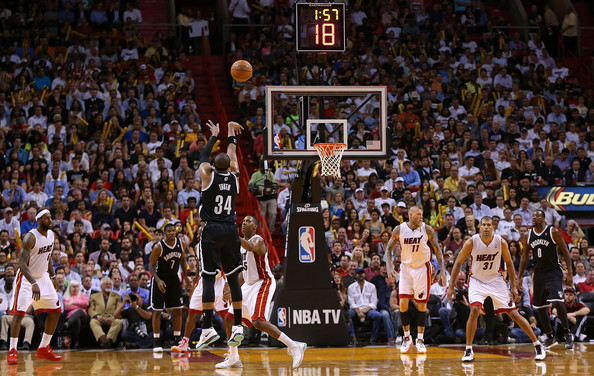 So what happened? Was it simply a case of the Nets playing at an unsustainable level?

Well that’s partially true I guess; the Nets were shooting exceptionally well at times. To just dismiss this as a good shooting performance, however, would mean that the Heat can do nothing to stop these scoring outbursts in the future, which I don’t believe is true. As such, I thought I would quickly look at some of the key defensive mistakes, which partially allowed Brooklyn to hit so many threes.

(Hint: leaving men open is not good, apparently a man by the name of Mike D’Antoni experimented with this method of defense, but it proved to be unsuccessful).

It’s well known that the Heat are usually very good defenders in transition, but in Game 3 this wasn’t always the case. Here we see that Miami does a good job of getting back making it a 4v4 game. The mathematical experts at HeatNation have written to tell me that 4-4=0. So that means there should be no Brooklyn player left unguarded. However there were severe communication errors in transition by the Heat which allowed Brooklyn players to find the open shots. 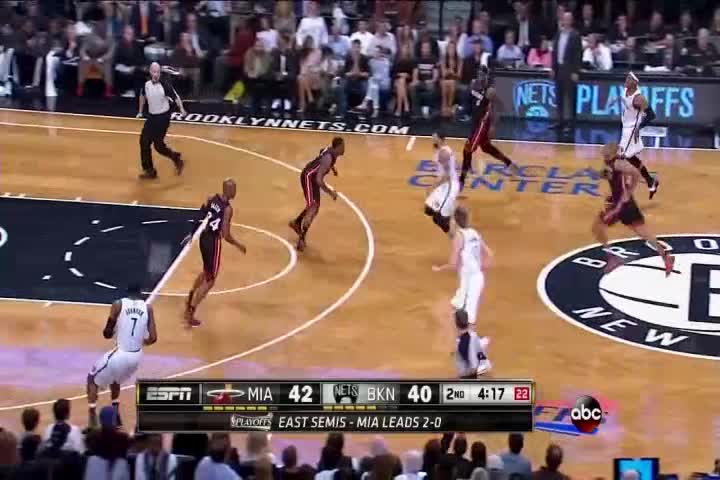 In this particular example we see that Brooklyn has a 3 on 2 advantage on the left hand-side. What happened? Well we see that Battier is unable to get to Williams or Kirilenko in time. In a perfect world, James would have recognized this predicament and he would have had Battier cover the slower Pierce whilst LeBron could cover someone else such as Williams.
Instead Allen has to come in to attempt to cover both Kirilenko and Johnson. Needless to say, Brooklyn got the points here.


Clip 2 shows Miami failing to get back whilst clip 3 shows us a lack of communication as Battier and Wade both try to cover the same ground instead of actually you know, covering people like Williams or Johnson. Covering non-existent penetration is important too though. Oh it isn’t? 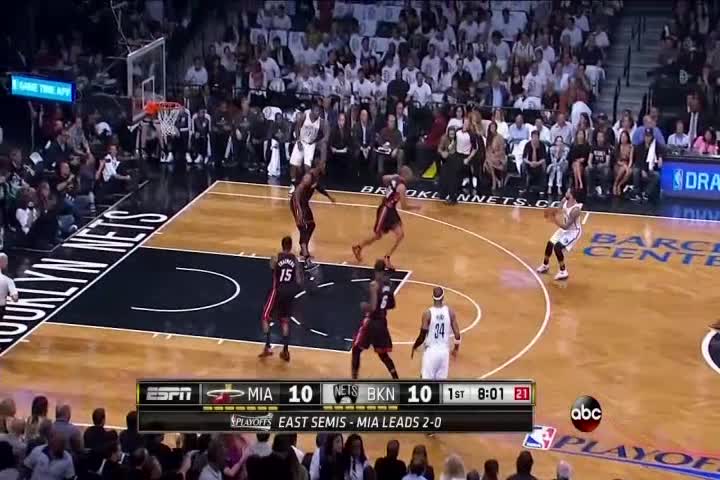 
Yes it’s true, one of the main ways Brooklyn caused the Heat problems in the regular season was by going to the low-post so often and avoiding  our pick and roll defense. Miami usually plays very aggressively off the pick and roll as they always look to hedge whenever possible. This sort of aggressive defense doesn’t work in the low-post as the Brooklyn players can very easily make the quick passes needed to find the open man.

Here we see that as Johnson posts up he sucks in a lot of defenders. In the end he passes to Blatche who loses the ball. It would be easy to say that the Heat were unlucky to concede this basket, but in reality Brooklyn had many opportunities here. Williams could go to the deep left corner for a quick hit (Johnson should give a quick pass so he can make a brush screen on Wade if they do decide to go for this option). 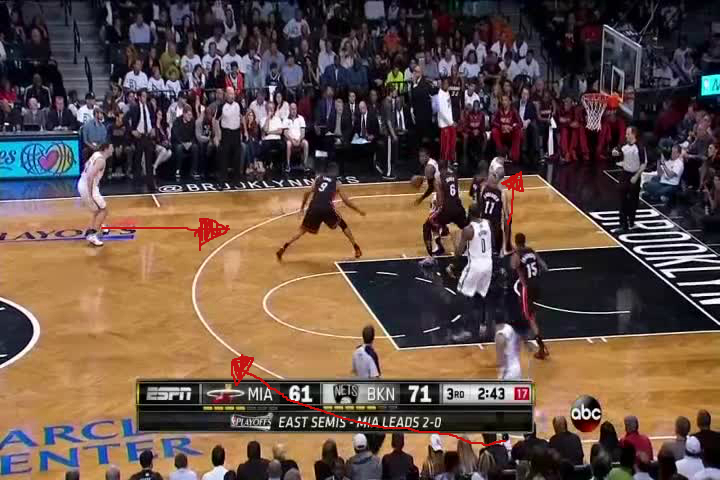 Williams should have looked to curl to somewhere near the top of the key where he would have been open (notice Chalmers looking away). Even if Chalmers does his Usain Bolt impression to recover quickly, Blatche can easily give a pin-down screen. Teletovic should also have positioned himself in an area where he could receive a pass and quickly find any open man if Johnson felt he couldn’t do this himself.

Helping ONE PASS AWAY


Hear we see LeBron helping off Teletovic who is ONE PASS AWAY. This allows the easy pass and the easy three. This happened a few times during the game and the Heat showed a lack of discipline; LeBron should keep his right foot in position as he lunges in towards Williams, this is called “showing” if you want to be technical. This would force Williams to make a decision without LeBron over-committing himself.

The next clip shows Cole needlessly drifting towards the ball and as we see, he is too far from Williams to recover. Cole’s error was a real shame, as up to this point the Heat had defended and tracked exceptionally well. I can only assume that Cole was hoping to sneak in and impress Johnson with his dance moves, thus distracting him so the other players can steal the ball. I’ve been told by the HeatNation staff, that this tactic has in fact never been used. Maybe we’re just not ready…

This was probably one of the biggest errors made by the Heat, which cost them the game. Miami’s aggressive defense, whether it comes in the form of hedging the pick and roll or trying to force turnovers from the perimeter, can only work if the team rotates quickly. The Heat usually rotate very well, but often times last night we saw they were slow to react.


Here we see a Livingston-Garnett pick and roll and Bosh hedges aggressively as per usual. Garnett sees this and does the right thing by slipping in to the paint with Duncan-esque expertise. Now Ray Allen comes in to contain any Garnett penetration and to hopefully deter a pass to Garnett. Luckily, Kirlienko is poorly positioned and Jones naturally covers the passing lane to Garnett from Pierce. At this point Wade should be looking to rotate onto Johnson, but he instead decides to come closer to Pierce. Pierce makes the nice skip pass to the open man and suddenly Brooklyn has a 19 point lead.

The image below perfectly depicts the disparity between the Heat’s rotations and Brooklyn’s ball movement. 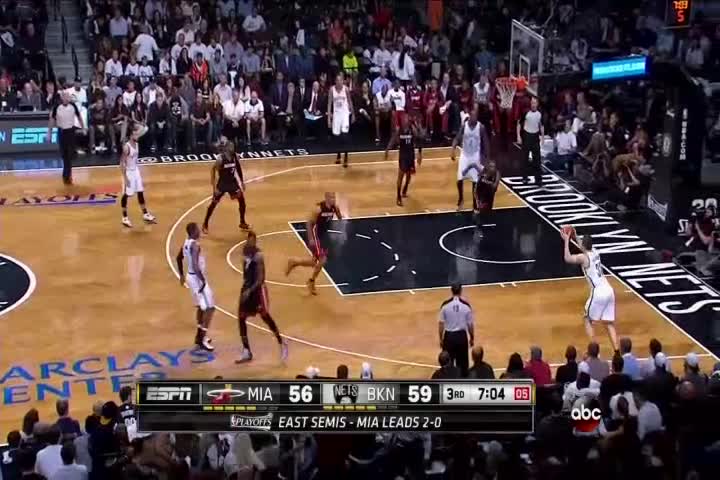 Here we have an inbounds play where Williams screens for Garnett. Kirilenko is able to find Garnett, who has now established good post-position from this simple play. Bosh, Cole and Wade all collapse on Garnett who makes the simple pass back to Kirilenko. Here over-helping is bad as we can see Kirilenko (who was one simple pass away from Garnett) is in a position to see and pass to all the Brooklyn players on the perimeter. Kirilenko later sets a nice pin-down screen for Johnson and we see just how far out of position Wade is at this point.

Overall we can see that the Heat had a defensive slip-up in game 3. Obviously Brooklyn played extremely well, but these quick crisp passes along the perimeter are common in Adelman’s corner offense, which the Nets are now employing. If you have four or five players along the perimeter, as is often the case with Brooklyn, the aggressive defense becomes much riskier as you leave clear driving lanes open. If the help defenders over-compensate, then the perimeter players are open to shoot threes. This is strikingly obvious in Clip 8 for example.

The Heat are obviously firm favorites and I’m confident that they can avoid committing the same defensive errors again, but this game should provide a strong reminder that the Heat need to be at their defensive best to ensure a series win.