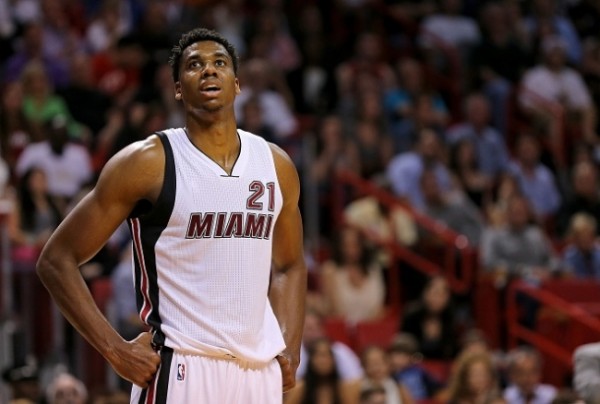 The Miami Heat will have to make a decision in the very near future regarding Hassan Whiteside.

Whiteside will become a free agent this summer and will likely demand a max contract as salary caps increase for the 2016-17 season. With the trade deadline approaching on February 18th, ESPN reporter Brian Windhorst states that the Heat will have to decide whether or not to package Whiteside along with Luol Deng before the deadline:

“The Heat have a decision to make: do you ride out the season with Whiteside or do you package him with Luol Deng before the deadline?”

While that may not come as surprising considering the Heat will have a hard time re-signing the 26-year-old center, Windhorst also states that Whiteside “is not a Heat player”:

“This is a guy who is going to get a max contract in the summer. And he’s absolutely not a Heat player. His style of play, his personality, the way he goes about his business is not congruent with the way the Heat normally go about themselves.”

What Windhorst is saying isn’t far from the truth—the organization does pride itself on having a selfless, mature way of handling business. In other words, the Heat are essentially the San Antonio Spurs of the Eastern Conference.

Whiteside obviously has strides to make in the maturity department and he does have a flamboyant way of going about his business. However, he is the top shot blocker in the league and is a consistent double-double threat at a position that lacks quality two-way players.

The Heat are currently within four games of the top record in the Eastern Conference and will likely be battling with several teams in the East for the second seed in the playoffs.

While the Heat could make a move to improve their troublesome three-point shooting, it’s hard to envision Miami getting rid of Whiteside at the trade deadline when Pat Riley will likely at least try to re-sign the 6’11” center over the summer.
[xyz-ihs snippet=”Responsive-Ad”]