Heat Nation Breakdown: 5 Positives to Take Away From Game One 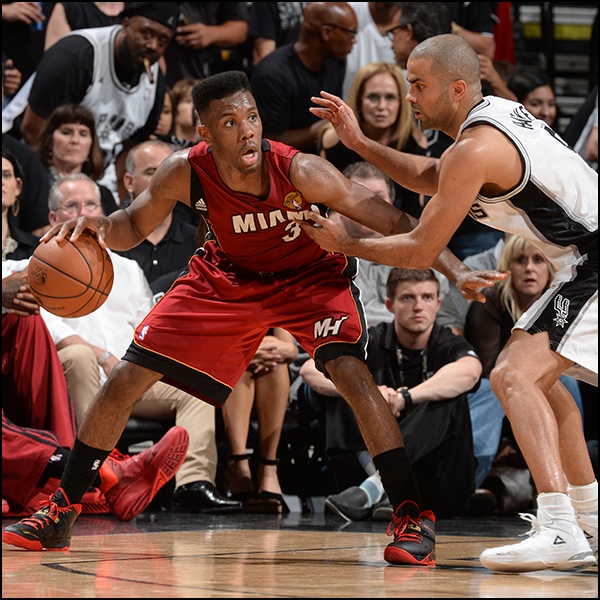 With game 2 approaching, I’m sure a lot of you must be pessimistic following game 1. If it wasn’t bad enough that #Lebroning has become such a cultural phenomenon that Obama will probably reference it at some point, the Spurs managed to beat us by 15 points. Ouch!

To brighten the day of every Heat fan, I thought I would highlight some of the positives which can be drawn from game 1.

The Miami Heat have the more athletic players and so they should always look to interfere with San Antonio’s offensive rhythm and we saw the Heat do this time and time again.

Here we see Andersen collide with Duncan. As Duncan falls over, Ginobili has to wait for Duncan to come over and run the side pick-and-roll (P&R). This gives the Heat defenders time to rotate and cover everyone and the Spurs offense looks stagnant.

Chalmers comes in to help very quickly, another advantage of slowing the Spurs offense down, and a turnover (TO) is forced. Duncan falls over again.

Crisp rotations by Cole and Battier forced this TO from the dreaded Spurs P&R.

I was especially impressed by the Heat’s concerted effort to prevent post-entry passes.

Unfortunately, the Heat were unable to exploit their forced turnovers and we didn’t see much of this, however Miami’s transition offense is dependent on a fully functioning LeBron, so hopefully this will improve in game 2.

Also, the important thing is to get the Spurs out of rhythm. If you allow the Spurs to play naturally, they will make the right passes 90% of the time. By giving them different looks, you may not force a TO, but you will slow down the Spurs offense. 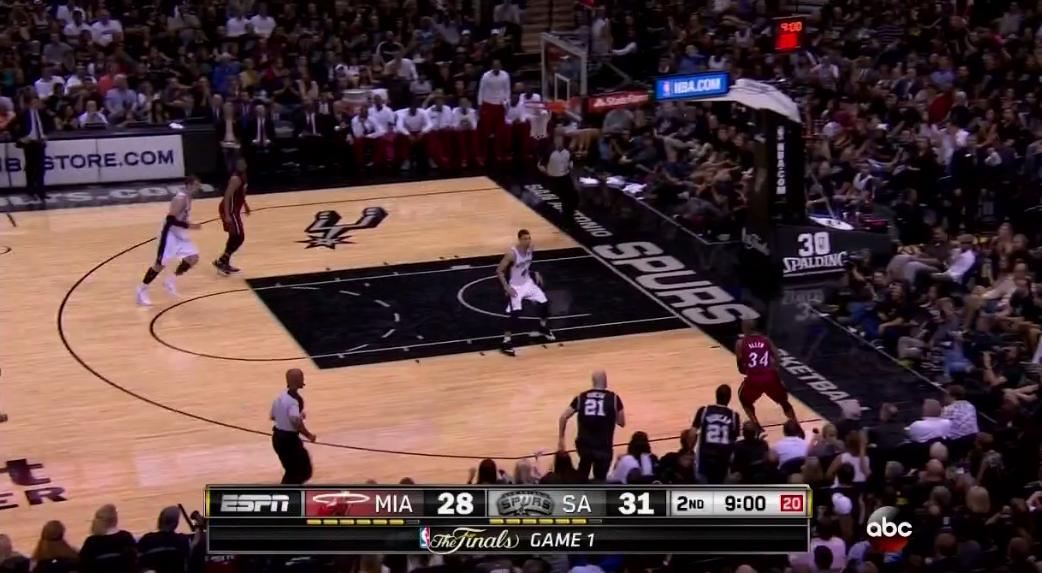 Unfortunately, the turnovers we forced very rarely led to these kinds of opportunities.

Looking at the match-up, it’s clear to see why Bosh led the Heat in scoring in both of their regular-season meetings; by sagging back to essentially play the role of a two-nine (à la ICE), Duncan and Splitter are leaving Bosh room to hit mid-range or even outside jumpers.

Bosh shot very well (7-11), but this isn’t really the most important thing. The important thing is that Bosh looks to shoot to make Duncan adjust. A good example of this concept was in the Atlanta Hawks-Indiana Pacers series. Both Millsap and Antic shot horribly from the outside, but after game 1, Hibbert was forced to vacate the paint and this gave Teague, amongst others, driving lanes. The Hawks nearly won that series and it was largely due to Millsap and Antic’s willingness to shoot from outside, so it’s very encouraging to see Bosh do the same. 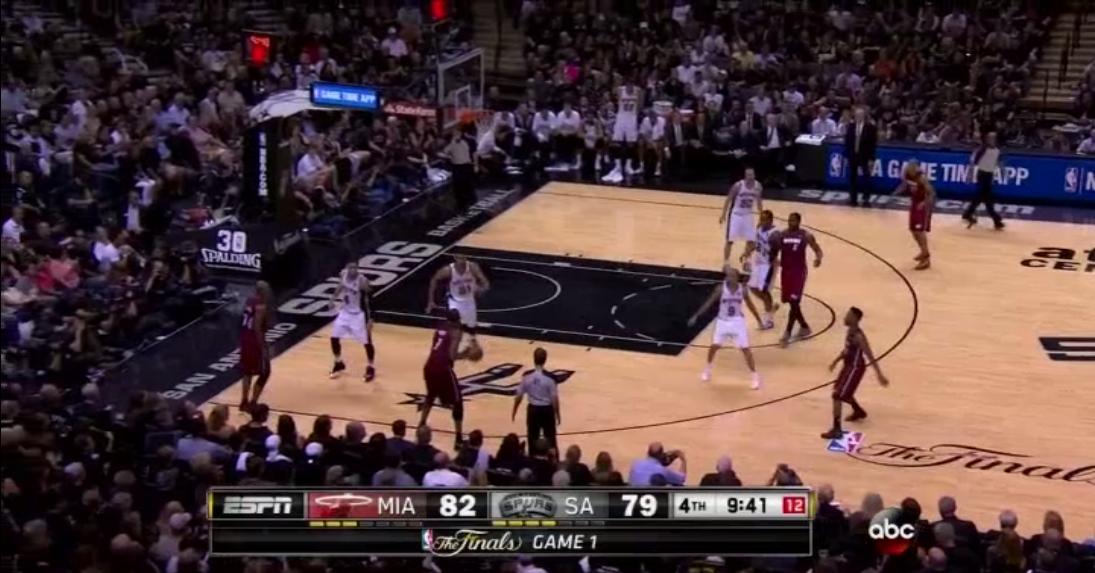 It’s nice to see Bosh exploiting this space by shooting, not by running a DHO. He even got a four-point play from this.

3. The Heat took the ball handler out of the P&R

Obviously when you blitz the P&R, the key is how well you rotate once they hit the screener. However, you also want to eliminate options for the Spurs, and San Antonio often goes into a Parker shot from a P&R in transition. If the Heat can defend the P&R when the ball handler is shooting, then you are forcing the Spurs to beat you in a half-court set.

Of the 12 possessions where the ball handler from the P&R or dribble handoff (DHO) took a shot, only one ended with a field goal: the last possession for the Spurs (which was still a heavily contested mid-range).

So how did they defend this so well?

Well, we saw that Parker’s defender would slip under screens to stop penetration. If he was taken out by a screen, it would then be up to the defender of the screener to close out on any Parker mid-range. They essentially just switch and sag back, baiting him into taking a low percentage shot. It was interesting to see this defensive scheme being employed in game 1, but it’s important to note that they only used this for Parker’s P&Rs in transition.

Here Chalmers slips under the DHO, but he is able to recover onto Parker. 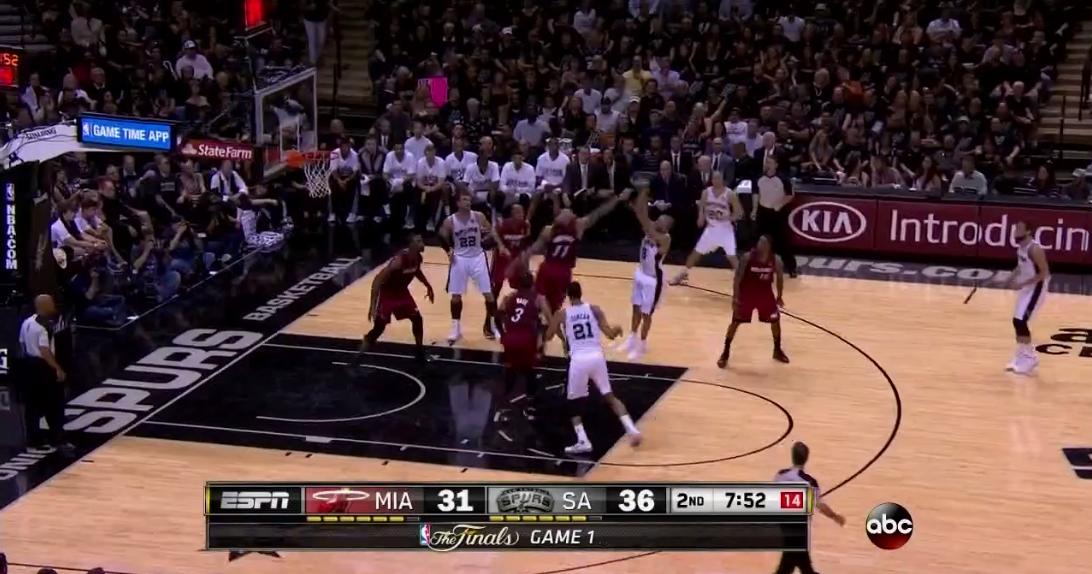 Andersen and Wade essentially switch after having sagged back. The Heat will be very happy with this coverage.

The first P&R is defended in the standard Thibodeau way, force the ball handler away from the basket and corral him to the baseline with your big, but we see that Battier is forced to contest the tough Mills three point-attempt from the second P&R.

Miami managed to generate more uncontested shots (37) than the Spurs (28), but they were less adept at converting those opportunities (48.6% compared to 53.6%). It’s also hard to believe that the Spurs will make 62.5% of their contested shots for a sustained period of time.

In general, the Miami Heat offense did many things well, but it was often unable to reap the rewards.

These are just three of the many examples of the Heat being able to penetrate/establish good post-position, and then kicking it out once the defense had collapsed. These are all victories for the Heat. 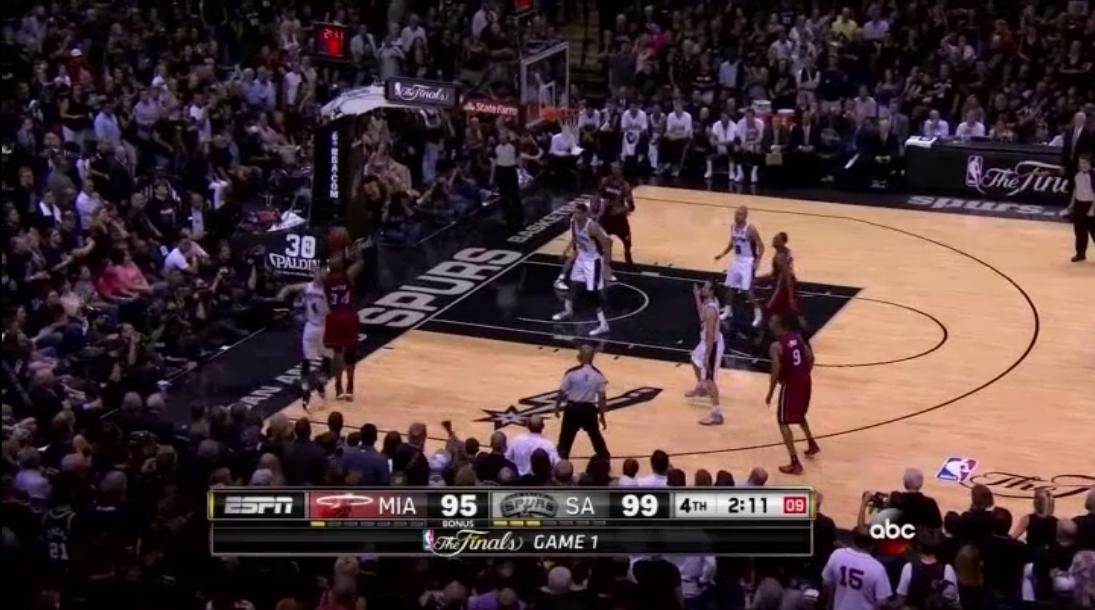 We don’t often see Allen missing these when he has a clean look.

5. LeBron will be back

Yes this is true. The best player in the world will be back in full force for game 2. Why is anyone worried?