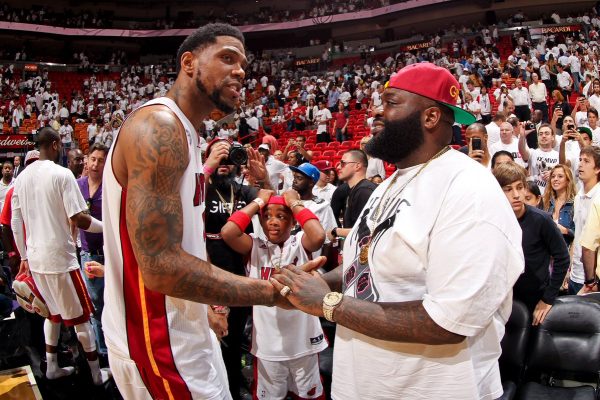 Miami Heat forward Udonis Haslem is preparing for his 17th NBA season, all of which have been with the Heat.

That loyalty resulted in a shout-out within a new track from hip-hop star Rick Ross, with the veteran taking to social media to show his appreciation for the gesture.

Ross recently appeared on “Jimmy Kimmel Live!” to promote his new album, “Port of Miami 2,” with the Haslem reference coming from the track titled “BIG TYME”:

“Miami Heat, I rep like my name was Udonis.”

Mentioning Haslem was one of many sports references that Ross made on his album, but the connection between Ross and Haslem specifically comes from their bond with the Heat and the city of Miami.

Haslem was born in Miami and has played his entire NBA career with the Heat. Fellow Miami native Ross has been an avid Heat fan and constant presence at American Airlines Arena throughout the years.

Haslem announced earlier this month that he would be returning for another year with the Heat. While his time on the court has been minimal in recent years, he’s been an invaluable leader on the team by offering sage advice to his younger teammates.

There had been speculation that he would follow close friend Dwyane Wade into retirement following the 2018-19 season, but he’ll instead return for at least one more year.